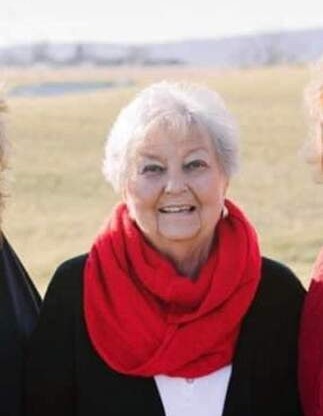 Connie Mae Rose Stalnaker, daughter of William V. and Lucille V. Rose of Frederick, MD passed away on Saturday, April 23, 2022, after fighting several months of various medical issues, most recently multiple strokes on March 26th.  Although things appeared to be improving, her fight was lost.  In her eyes, she was tired and ready to meet God in heaven.
She worked as a nurse for Dr. B.O. Thomas, Jr. for 25 years and retired as an RN from FMH (now FHH) after almost 20 years.  Connie was a graduate of St. John’s of Prospect Hall.  She attended Mercy Hospital School of Nursing and graduated from Frederick Community College.
Connie is survived by her daughters, Kimber Lee Shank (Steve Shook) of Middletown, MD and Kelly Leigh Webb (Todd Lewis) of Frederick, MD.  Her step-sons, Michael Stalnaker (Lorrie Wood) of Seattle, WA and Mark Stalnaker of Frederick, MD.  Grandchildren, Ashley LaGasse (Grant), Christopher Webb (Ashley), Stephanie Honaker (Ken), and Kristin Grove (Jacob).  Also surviving are great grandchildren, Kenneth Allen III (KAL) and Korie Jo Honaker, Caroline Rose and Kate Sarah LaGasse, Georgia Arleen and soon to be Alice Mae Webb, and Sutton Leigh Grove.  Also surviving are sister Jeri Hodge (Donald), brother, William “Petie” Rose, and sister-in-law, Shirley Redmond and numerous nieces and nephews who were all very special.  She also leaves behind her devoted dog and beloved four-legged friend, Scooter.
Connie was predeceased by her loving husband Bill, parents, brother James Redmond, sister Shirley Wiles and her husband Leroy, and her son-in-law Carl Webb.
She will be cremated by Stauffer Funeral Home and a memorial service will be held at First Baptist Church 7040 Bowers Road on Thursday, May 5th at 11am with Dr. Larry Eubanks officiating.
Per her instructions, no flowers.  Donations can be made to First Baptist Church on Bowers Rd or to Animal Control on Rosemont Avenue in Frederick.
“While on earth, God blessed me with a wonderful husband and four wonderful children and families.  I can’t leave here without acknowledging how proud they made me and how much I loved them.  God was good to me and I plan to walk beside him in my next home.”

To order memorial trees or send flowers to the family in memory of Connie Stalnaker, please visit our flower store.