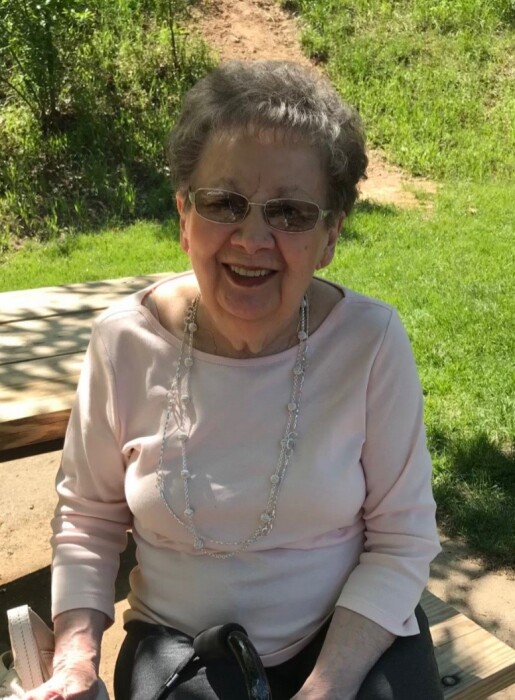 Joyce Knupp Taylor, loving mother and grandmother, died on October 11th, 2021 at her home in Adamstown, MD.  She was 90 years old.  Joyce was born on May 26th, 1931 on a working farm in the Shenandoah Valley, to the late Ida and Carl Knupp.  She had one sister, Arlene Knupp, deceased.
She was the first family member to graduate from college (James Madison University) with a Bachelor’s of Science in Education.  She met her husband, Bill, on a blind date at Virginia Tech.  As the story goes, Bill told her he would hitchhike from Tech to her family farm the following weekend.  She didn’t know him well enough to understand at the time that he always kept his word.  Sure enough, he showed up on the back of a truck as she was washing dishes in the kitchen.  She had another date that night, which she immediately cancelled.   They were married in September of 1953 and she became his spunky bride for life.
After Bill completed his military service in 1955, they made their way to Alexandria, Virginia, where Joyce taught 7th grade and Bill began working for Graybar Electric Company.  In 1958 he joined the sales team at WESCO, and together, they began a life of adventure that neither of them could have predicted.  As Bill rose through the corporate ranks, Joyce fearlessly steered her family through numerous moves, always making new friends, putting down roots, keeping traditions, and ensuring that her daughters were safe and happy and well loved.   She extended that same devotion to her sons in laws and grandchildren, teaching them the importance of those traditions and love and values.  Joyce was famously known for her cooking and she tried valiantly to pass those skills on to her daughters.  With her grandchildren by her side, she will be remembered for baking cookies and cinnamon buns, her love for rum raisin ice cream and flowers, coloring Easter Eggs, playing softball, going to the park, shopping, endless love and devotion.
Joyce was strong, proper, kind, humble, and selfless.  She was smart, a master of geography and history- no one wanted to play trivial pursuit with her unless they could be on her team. She believed in hard work and she always led by example.  One of her most quoted lines was when one of the grandchildren graduated from college and she said “Go forth and work.”  She earned the title “Farm Strong” from her family, and even in the end she was heard saying to herself “You are just going to have to buckle up Joycie!”  If Dad was the Captain of the Ship, then surely Mom was the Rock of the Family.  She raised her family with a deep and fierce love, creating a firm foundation for her daughters, sons in laws, and grandchildren.  This is her legacy.  She was greatly loved and admired, and she will be dearly missed.
Joyce was the beloved wife of Bill Taylor (deceased February 17th, 2014); loving father of Lindy and husband Ricardo, Kim and husband Patrick, and the late Cindy (who died in early infancy); and the cherished grandmother to Ashley Risher and Philip (husband of Ashley), Justin, Kristin, and Jake.    They will remember her great strength and joy and appreciation of the many blessings of her life, as well as her deep love and dedication to family.  We are all hoping that we inherited just a thimble of Mom’s “farm strong.”
A memorial service to celebrate Joyce’s life will be held at a later date at Prince of Peace Lutheran Church in Gaithersburg, MD.

In lieu of flowers, family suggestions for memorial donations include the following:

To order memorial trees or send flowers to the family in memory of Joyce Taylor, please visit our flower store.

Services are to be announced