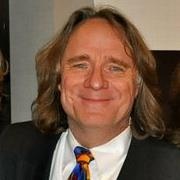 Louis Leonard Hodge, Jr., known to family and friends as Lee, passed away unexpectedly on Friday, October 16, 2020, at his home in Frederick, Maryland at the age of 61. He was the son of Louis Leonard Hodge, Sr., and Jean Marie Hodge. Lee was born in Takoma Park, Maryland. He often pointed out that he debuted on the same day as the first episode of the Twilight Zone. Lee had a great sense of humor and a distinctive style.

Lee grew up in Damascus, Maryland, and was a 1977 graduate of Damascus High School. He was active in the Drama Club and loved taking part in theatrical productions. After graduation, he studied computer technology at Control Data Institute. He began his career working for Wang Laboratories in 1979, repairing computers in downtown Washington, DC. Lee continued his education at National-Louis University, earning a bachelor’s degree in management. He went on to a 40-year career in information technology as a Software Engineer, Web Developer and Project Manager working for various government contracts and the financial services sector. His most rewarding assignments were for Sapient and Lockheed Martin as a Software Engineer for National Cancer Institute in support of their flagship web presence Cancer.gov. Lee was a 14-year colon cancer survivor.

Lee’s life was filled with music. He was a bassist, guitarist, and keyboardist who was passionate about his craft. He continued to develop his expertise as a musician over the years, as he explored a wide variety of music and incorporated it into his musical life. He enjoyed sharing his music with others and was a member of several bands over the years, continuing to seek out new musical opportunities. He was a member of Closed Mondays; Twister; The Shrubs; Ages of Fortune; Radio Paradigm; the John Zahn Band; and Baron, Johnson, Hodge. These bands played gigs at a variety of venues in the Washington, DC, and Baltimore areas. Ages of Fortune opened for Blue Oyster Cult at Jaxx in Springfield, Virginia, in 1995. Lee loved performing in the spotlight. From tuxedo jackets and top hats to puffy sleeves, sunglasses, colorful ties, Hawaiian shirts, turquoise pants and the ever-present colorful Converse shoes, Lee was a distinctive musical presence both on and off stage.

Lee was engaged in life, always inquisitive and learning, with a new project or interest or idea to investigate. He had a broad knowledge base and could remember details in many subject areas. This made him great at playing trivia games, and it gave him lots of ammunition for debates. Lee loved a good argument, and he was a formidable debater.

Lee loved animals. Aquariums, including one where a piranha named Nick resided, and cockatiels named Candy-O and Joe were among the animals that shared Lee’s homes. His most beloved pets were his dogs. He especially loved Westies. MacDuff, Tess, Merlin, Andy (rescue from Taiwan), and Mojo (Cairn rescue from Rhode Island) were all precious members of the family through the years. All vacations were planned around how to travel with the dogs.

Lee’s family was the most important thing to him. He was incredibly proud of his wonderful family. Sharing his musical talents and thirst for knowledge were a high priority: introducing all to new genres through carefully curated playlists for vacations each year, taking the family to concerts of their choosing, finding unique musical instruments for special occasions, inspiring all three kids to follow their dreams for a life inspired by music and accompanying Rhiannon for her senior talent show (they won!). One of the most comforting staples in the home was Lee on the acoustic. Spending time with his family was guaranteed to be a fun, loving, and supportive experience. He will be dearly missed by his children Rhiannon Leigh Buchman (Caleb), Dylan Louis Hodge, and Guinevere Marion Hodge; and the love of his life and mother of his children, Marion McQuiston Hodge. He will also be sadly missed by his sister, Barbara Hodge Mercer (Michael).

Lee was preceded in death by his parents and his nephew, Alex Graf.

A private burial was held at Mount Olivet in Frederick, Maryland. The family requests those who wish to express sympathy to consider donating to their favorite charity in Louis L. Hodge’s name.

To order memorial trees or send flowers to the family in memory of Louis "Lee" Hodge, Jr., please visit our flower store.