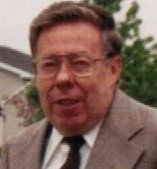 Alphonse was born in Danville, PA on February 19, 1932 to the late Anthony and Felixa (Kowalewski) Zienda. He was the thirteenth of fourteen children.

As a boy he was a alter server at the former St. Stephen’s Church, Shamokin, PA. He graduated from Coal Township High School in 1951 and attended Penn State University and the Thompson Business Institute. He served in the U.S. Army during the Korean War. He worked for the federal government for over 30 years at the former Olmsted Air Force Base (Middletown, PA), Valley Forge Military Hospital, and Fort Detrick, Frederick, MD. He retired from the U.S. Army Medical Materiel Agency (USAMMA) in 1987.

Al enjoyed spending time with his family and loved to cook. For over 25 years he had a food stand at the annual Catoctin Colorfest in Thurmont where he would bake over 100 apple pies each year.

He was a Life Member of the AMVETS, Fairview Gun Club, and the former Fairview Fire Company.

He was a member of Our Lady of Mount Carmel Church in Thurmont, MD.

He is survived by his son, Mark of Thurmont, MD and his sisters, Florence Hoffmann-Stuvek and Dolores Loncar (Robert), both of Harrisburg, PA, as well as numerous nieces and nephews.

On Tuesday, June 8 the rosary will be recited at 2:30 pm at the Stauffer Funeral Home, 104 East Main Street, Thurmont, MD. And the family will receive friends from 3:00 pm to 6:00 pm at the funeral home.

Mr. Zienda will repose from 8:45 am to 10 am on Wednesday, June 9 at St. Anthony’s Shrine Parish, 16150 St. Anthony Road, Emmitsburg, MD. A Mass of Christian Burial will follow and Fr. Collin Poston will serve as celebrant. Interment will be at the Our Lady of Mount Carmel Cemetery, Thurmont, MD.

To order memorial trees or send flowers to the family in memory of Alphonse Zienda, please visit our flower store.