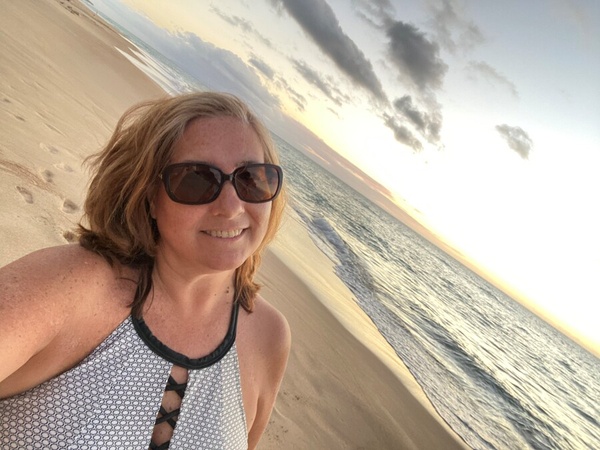 Angela Lynn "Angie" Galvin Burker, 51, of Sharpsburg, Maryland, passed from this life on Monday, May 9, 2022 at her home in Sharpsburg.

Born on January 6, 1971, in Carlisle, Pennsylvania, she was the daughter of Dennis N. and Melinda S. Galvin and J. Rebecca "Becky" (Naugle) and James J. Bruchey.

Angie graduated from South Hagerstown High School Class of 1989. She began her career at CitiCorp, now Fiserv, Inc., in Hagerstown, where she worked hard in various departments becoming the Vice President of their Product Delivery division for many years. She recently celebrated her 30th year anniversary with the company.

Angie was a self-proclaimed buyer, not shopper. She loved spending time traveling with her family, co-workers, and friends. Just recently she celebrated her 50th birthday in Hawaii. Angie traveled to the beach, went on cruises, and along the way made many friends. She was devoted to her children with whom she adored beyond measure. Angie was a devoted mother, sister, daughter, and friend.

In addition to her parents, she will be missed by her daughter, Jaylyn Paige Burker and fiance, Brodi, and her son, Justin Christopher Galvin, all of Sharpsburg; her sisters, Corinne A. Stone of Boonsboro, Christa M. Angelo of Hagerstown, and McKenna N. Swan and husband, Zachary, of Martinsburg, West Virginia; nieces and nephews, Joshua, Austin, Sara, Christofer, Malia, Olivia, and Jace; two great-nieces and one great-nephew; a host of devoted friends; and former husband, Trever "Jay" Burker of Sharpsburg.

She was preceded in death by her grandparents, Clarence N. and Pauline V. Galvin and Herman C. and Ruth P. Naugle; and her close friend, Kim Arwood-Slate.

The family will receive friends from 6 to 9 p.m. on Wednesday, May 11, 2022 at Bast-Stauffer Funeral Home, 7606 Old National Pike in Boonsboro, Maryland.

Funeral services will be private. A Celebration of Angie's Life will be held at a later date.

In lieu of flowers, memorial donations may be made, in Angie's memory, to the charity of your choice.

To order memorial trees or send flowers to the family in memory of Angela Burker, please visit our flower store.