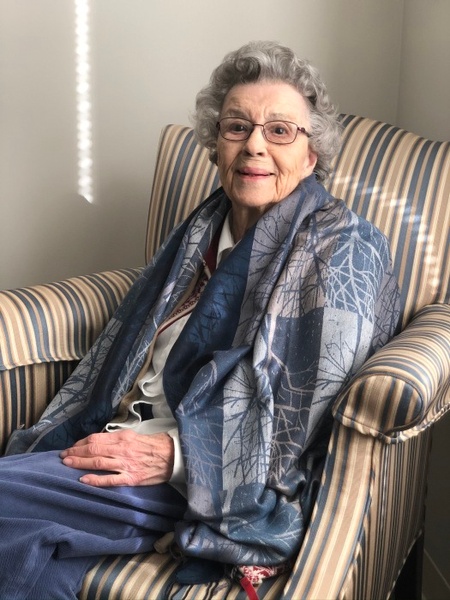 Ann began school in Baltimore, MD where the family had moved in the 1930’s. It was here Ann found her life-long interest in current events listening to radio news broadcasts in the evenings with her father.

When the family returned to Brunswick in the late 30’s, Ann attended school there.  In 1941 when Ann was 12, the family moved to Frederick, MD. She attended church and school at St John The Evangelist, graduating high school in the post-World War II years.  Continuing her education majoring in Early Childhood Development and Psychology, Ann graduated from Centenary Junior College in the late 1940’s and went to work in the Fort Detrick Nursery School on base.

In April 1949 she married the late Cyrus Gambrill, Jr. Between 1951-1961 the couple had three children.  After living several years in Catonsville Ann returned with her children to Frederick, and in 1968 she went to work for FCPS as an Aide in the Social Studies Department at Governor Thomas Johnson High School where she felt her interest in current events affirmed. Ann held subsequent aide positions in both Guidance and the Library until her retirement in 1994 after 26 years of service.

Ann liked traveling with family and visiting their homes in different states. During her retirement years, destinations included, the Caribbean, Western U.S. and Canadian Rockies. At home Ann devoted free time to reading avidly. She loved going to bookstores, the library, and taking autumn drives around the countryside.

Before and during retirement Ann enjoyed her grandchildren, treating them to favorite foods, overnights, and trips to county parks and the all-important toy store.  Once retired Ann volunteered at Thurmont and Brunswick elementary schools helping students with reading.

In 2013 Ann brought her passion for national and world news to Homewood. During her first years, walking into her rooms, one would often hear a TV news broadcast, and on Sundays, CBS’s Morning Program. Ann enjoyed surprise meals out with Sue around doctor appointments. With her son Pete driving, she expanded her autumn countryside rides to year round. In recent years, she loved viewing wildlife and horses from her favorite chair at Rus & Debbie’s home in Carroll County.

The family would like to thank the staff of Homewood Crumland Farms, both those in Woodlands Assisted Living and those in the Health Care Center’s Willows Memory Care Unit all of whom provided the most excellent care, treating Ann with compassion and respect. Pete and Rus give a special thanks to Sue, for her loving and tireless efforts helping Mom during her Homewood residency.

In lieu of flowers donations in memory of Ann can be made to The Homewood Foundation’s Benevolent Fund.

A private graveside service will be held at the convenience of the family. Arrangements are with Stauffer Funeral Home, Frederick and Stauffer Crematory, Inc.

To order memorial trees or send flowers to the family in memory of Ann Gambrill, please visit our flower store.