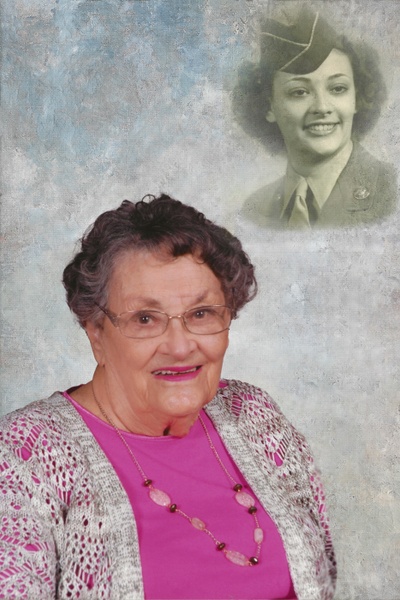 AnnaBelle (Stansberry) Childers, age 98, left this earth with amazing grace on April 13 at the home of John and Kay Brown where she had resided the last 4 years in Clarksburg, MD.  She was the daughter of the late Hunter and Faye (Smith) Stansberry born on February 26, 1924, in Grove, WV, oldest of five children.  She was wife of George B. Childers, who predeceased her in 1978.

AnnaBelle graduated from Doddridge County High School in 1942.  After graduation she was employed at Westinghouse Electric Manufacturer Co. in Fairmont, WV, 1943- 1945 as a machine operator who made glass parts for electronic tubes in support of WWII effort. Wanting to continue serving her country she enlisted as a medical technician in the Women’s Army Corps (WAC) in 1945.  AnnaBelle was automatically honorably discharged when she married George in San Francisco, California, on May 25, 1946.  They returned to Smithburg, WV where they raised five children, Kay married to John Brown, Clarksburg, MD, Linda Sue Corder, Frederick, MD, Wayne married to Susan (Kiger), Charlottesville, VA, JoAnn Leigh, Frederick, MD, and Marvin married to Pam (Sponaugle), Richmond, IN.

She was a volunteer member of the Doddridge Co. Emergency Squad, member of the American Legion in West Union Chapter and served Smithburg UM Church in every capacity over the years.

After George’s death in 1978 AnnaBelle was called to the ministry.  She completed her Ministerial course of studies from Duke University.  In 1981 she was assigned to the West Virginia United Methodist Conference serving churches in Grantsville, Sissonville, Frametown, Franklin, and Aurora, WV.    She retired from ministry in 1989 and moved to Frederick, MD where she assisted with the care of her granddaughters Allison and Amy Leigh.  She worked sales at Macy’s Department Store and Kirby-Smith Associates, assisting in pledge campaigns for churches throughout the country.

She was member of Calvary UM Church in Frederick, MD where she attended Bible studies, Miriam Circle, and sang in the choir.  She was excited to begin service as a Stephen Minister in 2004.  She worked on various church supported projects, homeless shelter, soup kitchen, etc.  Thanks to many church members that sent cards and called when she was unable to attend church.  Special thanks to Susan Engler for her love and friendship.  Appreciation to Pastors Steve Larsen, Ken Humbert, and Harry Cole for their virtual sermons, calls and visits.

She missed many friends when she moved from Spring Ridge Senior Apartments to her final home in Clarksburg.

Thanks to Hospice and those that cared for mom during her transition to her heavenly home.   Nurse Laura Butman, Chaplin Valentine, Keith Midberry, who honored her as a veteran and Jen Stonebraker who so lovingly cared for mom.

Memorial service will be held at Calvary UM Church, 131 West Second Street in Frederick, MD on May 7, 2022, at 11:00 am with Steve Larsen officiating. Her ashes will be interred at Masonic Cemetery in West Union, WV, beside her husband, George at a future date.

Expressions of sympathy may be offered to the family at staufferfuneralhome.com

To order memorial trees or send flowers to the family in memory of AnnaBelle (Stansberry) Childers, please visit our flower store.