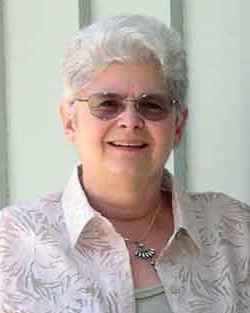 Billie Ann Whited (née Golden) of Woodbine, passed away unexpectedly in her home Sunday December 19,
2021.
Named for her mother (Ann) and father (Billie Bobs Golden), Billie was born December 18,
1946, in Junction City, Kansas. She met Charles Whited at the University of Kansas, and was
married January 21, 1967. Billie earned her Bachelors in Mathematics from the University of
Kansas, graduating a year early in order to join her husband during his travels as an Air Force officer.
Billie worked as a math teacher for public and private schools throughout the country, and often
had a side craft business such as macrame, ceramics, or electroplating. After her husband’s
retirement from the military, she worked as a real estate appraiser in Los Angeles, California.
She eventually removed to Woodbine, MD, to live near her children and grandchildren.
Known for a variety of hobbies, Billie enjoyed nearly a lifetime of genealogical research on her
family tree, often fretting over the number of “Peter Murphys” in the New York census. When
not tracking down relatives who never knew they were lost, she could be found hunting for such
treasures as corn cob holders, games with missing pieces, and $3 box lots at auction that ‘might
have something that could be useful one day”. Billie helped her husband keep in shape in his
retirement by expanding her collection of antique sewing machines, which she enjoyed cleaning
and repairing. In recent years, these same sewing machines were used to create thousands of
fabric masks, which were then gifted to friends and donated to charities.
Her true pride and joys are displayed on Billie’s social media page. Filled with flora and fauna
from the surrounding countryside, it contains pictures of birds from her bird feeders, turkey, bald
eagles, deer, snowscapes, rambunctious grandchildren herded by her husband, and the
occasional daughter. She won multiple ribbons at the county fair, and taught important life skills
to her grandchildren, like cake decorating, picking blackberries, and dipping candles. Billie’s
greatest joy was watching her grandchildren grow from babies into a mature young woman and
three active young men.
Billie was cooking a double batch of fudge and looking forward to Christmas when she became
tired and laid down to nap. She died peacefully in her bed, having just celebrated her 75th birthday.
Billie is survived by her husband, Chuck Whited of Woodbine, MD; siblings Terry Golden (Judy)
of Lawrence, KS and Tammy Calkins of Topeka, KS; daughters Lori Titus (Dave) of Mount Airy,
MD and Jeannie Whited (Mark) of Centreville, VA; Grandchildren Rowan, Arthur, Brannon, and
Charlie Titus; Niblings Michael Calkins and Alyssa and Kelsey Golden; numerous cousins
various times removed; friends from all walks of life; 258 pairs of corn cob holders and more
sewing machines than her family realized.
The family will receive friends from 2-6 PM on Thursday, December 30, 2021, at Stauffer Funeral Home, 8 E. Ridgeville Blvd,
Mount Airy, MD. All are welcome to attend and celebrate Billie’s life.
In lieu of flowers, memorial-donations may be made in Billie’s name to Mt Airy Net, www.mtairynet.org.
To order memorial trees or send flowers to the family in memory of Billie Whited, please visit our flower store.