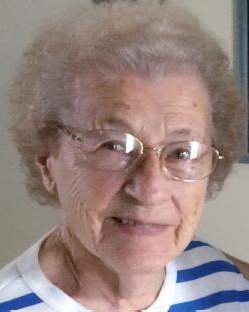 Mrs. Blanche Keeney 101 of Thurmont, Maryland passed from this life on Wednesday, August 24, 2022, at Frederick Health Hospital, in Frederick, Maryland. She was the wife of the late Merhle E. Keeney whom she married January 13, 1941.

Born on July 20, 1921, in Sabillasville, Maryland, she was the daughter of the late George Norman and Myrtle Magdeline Ferguson Holtz. She was preceded in death by her daughter, Kathy Jean Pearcey.

Mrs. Keeney was a graduate of Thurmont High School class of 1939, she retired in 1990 from the FCPS as a cafeteria worker, where she worked for many years.

She was a member of the Weller United Methodist Church in Thurmont.

She is survived by two grandsons, Jeremy Pearcey and David Pearcey both of Frederick, Maryland; one great-granddaughter, Ashley Kershner and husband Cody of Greencastle, Pennsylvania; one great-great-granddaughter, Bristol Kershner; sister Betty Jean Burgess and husband Harold of Hagerstown, Maryland and several nieces and nephews. She will be particularly missed by nieces Barbara Miller, Brenda Deeter and nephew Ricky Deeter.

In addition to her parents and daughter, she is preceded in death by brothers, Wilbur G. Holtz, Charles F. Holtz and Paul W. Holtz and sister, Mildred M. Utz-Gardner.

The family will receive friends at Mount Olivet Mausoleum, 515 South Market Street, Frederick, Maryland 21702 on Wednesday, August 31, 2022, from 11:00 AM to 1:00 PM.
A graveside service will be held at the cemetery after receiving friends.

To order memorial trees or send flowers to the family in memory of Blanche Pearl Keeney, please visit our flower store.