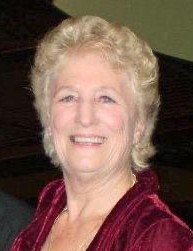 She was born on May 31, 1939 in McLeod, Texas, to the late Clayton and Lois Holmes. Her family later moved to Woodsboro, Texas, where she graduated high school. She attended Southwest Texas State College in San Marcos, Texas, as she worked towards a teaching degree.

During her studies, she moved to Pinon, Arizona, and then Gallup, New Mexico, where she taught English as a Second Language in the Navajo Nation. She completed her degree while living in the Southwest. After moving back to Texas, she worked as a schoolteacher in New Braunfels. She eventually taught special education at the New Braunfels High School until the late 1970’s.

In 1975, she met and married the late Dr. Franklin Kriewaldt in a whirlwind romance during which they combined seven children between them into one large family. After a few years, they found themselves expecting an eighth child. During the ninth month of pregnancy, Mrs. Kriewaldt tripped and fell off her front porch, breaking her ankle in four places. Sitting around with a broken leg, a newborn baby, and too much energy, she asked Dr. Kriewaldt for a piano. Obliging her, an upright piano arrived in the Kriewaldt living room and Kriewaldt Keyboard was born. Falling back on the piano lessons she’d taken as a child, as well as years of band in high school and college, Mrs. Kriewaldt started her own piano teaching studio.

Always a natural musician, she taught herself how to play the organ and was hired as the organist of the New Braunfels Presbyterian Church. She completed her second degree in organ performance at Incarnate Word College in San Antonio, Texas in the l980’s.

After the Kriewaldts relocated to Frederick, Maryland in 1990, Kriewaldt Keyboard grew into a renowned piano studio and Mrs. Kriewaldt won many teaching awards over the years. Her students knew her as “Miss Carole,” and her door was always open for visits as well as lessons. Known for her quirky sense of humor and effervescent enthusiasm, she would often tell her students, “You play and I’ll pray!” Her students won awards at local, state, regional, national, and international levels. In 2014, Mrs. Kriewaldt was named the West Virginia Music Teacher Association’s Teacher of the Year.

She kept up her organ performance and was a substitute organist for St. Paul’s Lutheran Church in Walkersville, Maryland, where she also started up a children’s choir she dubbed, “Jesus’ Juveniles.” Sensing the need for community activity, she grew the music program into four choirs with regular performances all on a volunteer basis.

There will be a viewing held at Stauffer’s Funeral Home in Frederick, Maryland on Friday, February 11th from 6-8pm, and a Celebration of Life service will be held at St. Paul’s Lutheran Church in Walkersville, Maryland on Saturday, February 12th at 10:30am, led by Pastor Phil Beck. Burial with her beloved husband at Arlington National Cemetery will follow at a later date.

The family asks that in lieu of flowers, check donations be made to support the non-profit organization Ebony Music, Inc., 4004 Dresden Street, Kensington, MD, 20895. Alternatively via their website: ebonymusic.org

To order memorial trees or send flowers to the family in memory of Carole Ann Holmes Kriewaldt, please visit our flower store.