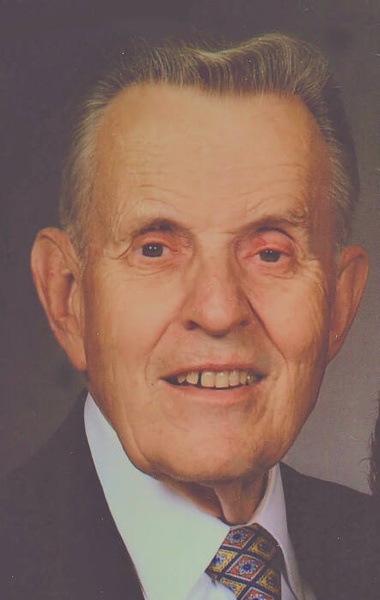 Charles Albert ("Charlie") Nicodemus, life-long resident of Walkersville, MD, died on May 28, 2022, with members of his loving family by his side.  He was the husband of Kathryn Zimmerman Nicodemus.  In addition to his devoted wife of 70 years, he is survived by two children and their spouses, John C. (Ellen) Nicodemus and Kathryn Nicodemus (Gary) Baker, four granddaughters and one grandson, and ten great-grandchildren.

Born March 2, 1929, he was a son of the late Robert N., Sr. and Helen K. Nicodemus, and brother of Robert N. ("Bob") Nicodemus, Jr.  He and Bob were close in age (Bob was 1 year and 1 day older than Charlie), and they remained close friends until Bob's passing in 2013.    Charlie graduated from Walkersville High School in 1946 and from Johns Hopkins University on June 10, 1950, with a Bachelor of Science in Business degree.  After graduation, further insurance courses were taken at Purdue Univ. and Penn State Univ., preparing him well for a future career in the insurance profession.

The first seven years of his business career, however, he was Vice-President and Manager of the Robert Terry Garment Co., Inc. in Walkersville.  This was a family-owned business, a contract sewing factory with ten employees, making nationally advertised McGregor sport shirts.

In February, 1960, he joined Frederick Mutual Insurance Co. as a Manager-Trainee.  He was named Secretary of the Company in 1965; Director in 1970, and President and Treasurer in 1973.  After fifteen years as President, he retired and was named Chairman of the Board, serving until May 2005.

During his insurance career he was very active in insurance-related organizations, serving in various executive positions and on various boards of directors.   As a result of his dedication and achievements, he was the recipient of many national and state insurance awards.

In 1973 he was named a Director of the Farmers and Mechanics National Bank, Frederick, MD, until he retired in 1999.  He served as Chair of the Bank's Trust Investment Committee from 1977-1999.  He also appraised real-estate for the F & M Bank for twenty-five years.

One of his favorite civic endeavors was his membership in the Rotary Club of Frederick. He joined that Club in 1964, and served as Club President in 1970-1971.  Over his fifty-eight years as a Rotarian, he won many District 7620 and national awards.  He gained much satisfaction from the twenty years (1988-2008) that he coordinated the Rotary speech contest for high-school orators, on behalf of the four Rotary Clubs in Frederick.

Charlie and Kathryn were avid supporters of Hood College, where he served on the Board of Trustees under four Presidents, from 1992-2004.  Recognizing the couple's support, enthusiasm, and commitment, Hood College honored them in 2005, bestowing upon each of them the Honorary Degree "Doctor of Humane Letters."  In 2008 he and Kathryn were among the first to be inducted into the Hood College Athletic Hall of Fame.  He received the "President's Award" at the Hood graduation ceremony in May, 2013.  The Nicodemus Athletic Center was named in their honor.

The Frederick Woman's Civic Club named him a Mardi Gras King in 1979.  He and wife Kathryn received numerous civic awards, including the "Families Plus! Annual Reinberger Award " and "Good Samaritan of the Year" Award.  He also received the "Frederick County Distinguished Citizen" Award from the Boy Scouts of America.

He was a founding donor and Chairman of the Board of the Community Foundation of Frederick County for two years (1990-1992).

The Johns Hopkins Univ. Class of 1950 has held an annual reunion since 2000.  Since Jan. 2006, Charlie was Chair of the committee to plan the annual event.  He was particularly proud of the lacrosse team during his time at Hopkins, since they never lost a single game over those four years.

In Nov., 1961, when the Town of Walkersville formed their Planning and Zoning Commission, Charlie was named Secretary-Treasurer.  He served in that volunteer capacity until Nov. of 1989.  He was a member of the Board of Directors of the United Way of Frederick County from 1993 to 2001, and was Chairman of the Fred. Co. Board of Ed. "Gifts for Education" program from Oct. 1997 to Sept. 2010.

More recently, he was a charter member of the Walkersville Historical Society beginning in March 2012.  He wrote several "looking back" articles for local newspapers, capturing the history of the Glade Valley Bakery, the Robert Terry Garment Co., the Walkersville Water Co., and the Methodist Church playground (1920-1939).

Charlie was an avid Baltimore Orioles and Ravens fan.  For ten years he managed Little League and Babe Ruth teams for the Glade Valley Athletic Association.

Charlie and Kathryn travelled extensively, visiting all but four U.S. states, and forty-one countries spread over six continents.  They also enjoyed a number of riverboat and ocean-liner cruises.  But since 1986, few trips would compare to those relaxing times at their vacation home at Kenwood Beach, on the Calvert Cliffs of the Chesapeake Bay.

There's no mistaking that Charles Albert Nicodemus was blessed with a full 93 years of love of life and dedicated service.  Enthusiasm, wit, and wisdom were some of his trademarks, and his legacy continues through family, friends, and funding.

The family will be available to visit with friends on Thurs., 6/2, from 2-4 PM and 6-8 PM, at Coffman Chapel on the Hood College campus.  A service of celebration of Charlie's life will take place the next day, Fri., 6/3, at 11 AM, also at Hood's Coffman Chapel.  All are invited for conversation and light refreshments in Hood's dining hall following the service.

For those desiring, memorial donations may be made to the Community Foundation of Frederick County (for the endowment fund of the Walk. United Methodist Church) at 312 E. Church St., Frederick, MD 21701, or to the Charles Nicodemus Scholarship Fund at Hood College, 401 Rosemont Ave., Frederick, MD 21701.

To order memorial trees or send flowers to the family in memory of Charles Albert ("Charlie") Nicodemus, please visit our flower store.