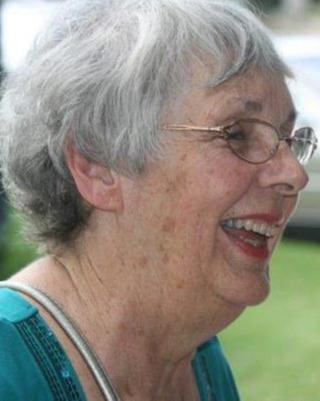 She was born as Christena Louise Miscall on Saturday, April 13th, 1940 in Albany, New York to Mildred Lila and Darwin Miscall. She died in her home in Frederick, Maryland as Christena Louise Lundy on Monday morning, October 10th, 2022. But she was much better known as Mom, Grammy, Chris, Cuz, Tia Chris, Aunt Chris and Nurse. Somewhere in the middle she spent time as Christena Louise Pazos, and good thing she did or her two kids, Javier Felipe Pazos (whom she used to call Jah-Bear) and Christena Maria Pazos (whom she always called Titi) wouldn’t be knocking about, nor would her only grandson, 13-year-old Rafael Darwin Pazos (whom she called Radar).

Her family and those on whose lives she left an indelible imprint were many more. There is her younger brother Peter Miscall of Haverhill, Massachusetts, her Miscall niece and nephews, a good gob of cousins (special shout out to Meg and Laurie who had become her core tribe over the past couple of decades) and the ‘Pazos’ family that she married into, who embraced her and never let her go (yes, you can divorce a spouse, but keep the rest of the family).

She lived in so many different places throughout her brilliant nomadic life – first because her dad was a regional salesman who moved about a bit and later because she loved new adventures. In the 1950s, she lived in Elkton, Maryland. Elkton was not an especially socially progressive place at the time, but she always was. She recounted a story of a time she, as a young girl, went to buy a magazine with Harry Belafonte on the cover (she had a bit of a crush) – the woman behind the counter advised her that it was a magazine for “colored” people. She snatched the magazine from the counter, slammed down the money and told the woman she had the money and could buy whatever she wanted to. She remembered that as an epiphany moment that racism is stupid.

From Elkton, she slogged up to Wilmington, Delaware to attend and graduate from Ursuline Academy High School in 1957. She attended St. Joseph’s College in Maine, graduating in 1961 with a Bachelor’s degree in English. During her college years she worked on her first political campaign – for JFK. She taught English at the Sorbonne in Paris for a year, hitch hiked through Europe, lived in Surrey, England working as an Au Pair and spent the summer of 1962 in Ljusdal, Sweden just to see the midnight sun.

Her first career was in education and linguistics. She loved language and languages (profanity being no exception). Beyond the French that she spoke fluently and taught, she self-taught herself Spanish (when she married into a Cuban family, so that she could understand the in-laws), Italian for kicks, Japanese to read inscriptions on art and starting in her late 60s, Mandarin Chinese because – well, because she never, ever lost her thirst for learning. She LOVED learning, was surrounded by books and had an insatiable curiosity about so many topics – history, art, diverse cultures, nature, animals, languages, archeology, genealogy and absolutely, categorically NOT about technology.

Her second career was raising her two kids in Claymont, Delaware. She did it with commitment and flair (including the not-so-occasional flair of her temper). She was the chauffeur who took her kids everywhere, she created elaborate handmade Halloween costumes (man did she love Halloween), took frequent trips to see family in Maine, Maryland, Colorado and even Venezuela. And she continued to be a teacher – inspiring and teaching her own kids in so many small ways – fossil digs, gravestone rubbings in old cemeteries and correcting poorly spoken grammar (every single time). She’d been raised in that New England style of stoicism where mushy things like “I love you” were rarely spoken, but she demonstrated her giant love and dedication to her kids (and later her grandson) through her actions.

Her third career was as a Registered Nurse, returning to school in her 40’s to earn her degree and certification. For five years she worked as a traveling nurse, using the opportunity to further feed her love of travel and adventure. She lived in fun places like Charleston, SC, New Orleans, Florida and her very favorite, the Hopi Reservation just east of the Grand Canyon where she fell in love with Native American culture. She spent over 20 years as a nurse before retiring in 2009 in Hollywood, Florida.

Grown kids and then retirement afforded her the time to run deeper down the rabbit holes of some of her passions – Art, Travel, Politics and Genealogy. Her art collection grew to fill all the empty spaces on her walls – not expensive art, but art she loved and art that held a story – places she’d been, cultures she loved or simply the raw beauty or truth she saw in our world and its people. She traveled all around the US, to Europe, the Caribbean, Central America, New Zealand and Asia. She worked on local and national political campaigns, becoming a key member of her Hollywood, Florida Democratic political group. And she spent countless hours tracing the roots of her family history (and that of family friends) to leave her kids and grandson with a mature family tree in full blossom so that they better understand the paths of history that led to their unlikely stay on this earth.

For anyone who knew or met her, you’ll notice a glaring omission from the above brief summary of a very packed 82 years - that being her pets. From the earliest 8mm film footage that her father shot to her last days, she could always be found in the company of her pets. There was always a cat or a dog, sometimes a cat and a dog and sometimes one or both in the plural. Along the way there was a pig, some fish, mice and rabbits. Once she moved to Florida to be closer to her daughter in the 1990s, the real fun began. Her daughter shared her lifelong love for animals and generously rescued many – mostly dogs. But a busy work and travel schedule makes for a poor doggy home, so Mom got to “foster” dogs and cats and rabbits (sometimes as many as 6 or 7 animals at a time). She (rightfully) complained about the burden imposed upon her, but she never once turned a pet away. Once she’d accepted a pet into her family, there was no rehoming any of them. No matter how stupid and useless (eg, Dexter), she loved her pets and they owned her – she was a massive pushover. On the day she passed away in her home, there were two dogs, two cats and a rabbit living with her – none of them her doing, but all of them family that filled her last years with purpose, humor, love and lots of fur.

If this paints a picture of a doting, sweet or perfect women, then take it with a grain of salt. This was written by her daughter who is deeply grieving her mom. It would better have been written the year before she got sick or a year from now. My mom was far from perfect and our very close and committed relationship involved lots of cursing, nagging, eye rolls, control issues and fretting over politics, finances, animals or anything and everything. To meet her was to meet a tried-and-true pessimist. And yet she wasn’t. Because just under that surface was the strong, independent, brave, passionate, loyal and hopeful woman who was honest and generous to her core.

My mom has been making regular donations to the St. Labre Indian School in Montana for decades. I always assumed it was related to her time spent on the Hopi Reservation – that she had somehow connected with them during that experience. In recent months, she spent more time recounting some of the ancestral discoveries she had made as she had built our family tree, reaching back hundreds of years – or maybe I just spent more time listening. One of our ancestors was a real rotten apple that had participated in atrocities against American indigenous people. My mom wanted to make some small reparation for the sins of her long dead ancestor, and she looked for a school to support. My mom is a graduate of Ursuline Academy and she found St. Labre, that was established by the Ursuline nuns in 1884. It is a wonderful school that lifts kids and families out of poverty, affording them brighter futures and she quietly supported them to the tune of thousands of dollars simply because she felt it was the right thing to do. It is a perfect example of her core decency and why, whatever bickering we did, she always was and always will be my moral compass. I never said it enough, but I love you profoundly and I will miss you terribly Mom.

In lieu of flowers, please consider a donation in her memory to St. Labre Indian School (stlabre.org/) or to Frederick Health Hospice (frederickhealthhospice.org) that made it possible for Mom to spend her last weeks at home with her family.

To order memorial trees or send flowers to the family in memory of Christena Louise Lundy, please visit our flower store.