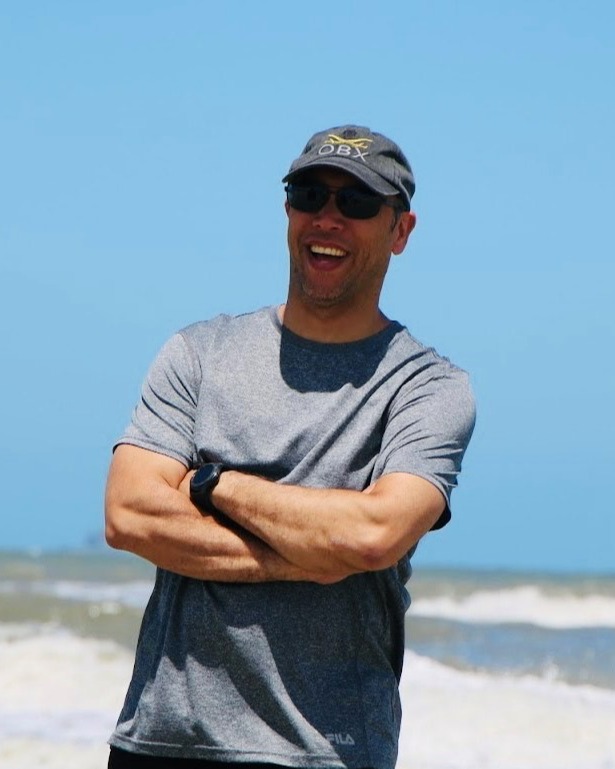 Christopher Frederick Chen (age 50) left this earth on December 4, 2022, holding the hand of his wife of 18 years, Kimberly Chen. His beloved mother-in-law, Lois Abbott, his son, William, and his daughter, Thassanee, said their goodbyes and surrounded him with all the love he had had every day at home. The bravery of his children on his last day made his mom, aunt, and uncle cry. They come by that courage honestly.

His siblings, Nat and Austin, stayed until he transmitted a silent message to them, in his big brother voice, to “Go, already!” Like the Star Wars lore he loved as a kid, it was as if he had used The Force. They left. Ten minutes later, Kim said, “I will see you when I see you.” She’d said it throughout their marriage – one of their many in-jokes. She took his hand and he took his last breath. His last moment, like his life and his two-year battle with brain cancer, was on his terms – alone with his true love, with his voice in her head, promising to ‘come back’ to see her. Chris was not a believer in ghosts, angels, or an afterlife, but he was absolutely certain of the power of love to transcend the very worst and to endure.

His capacity for hope and love were in his base code from the day he was born. How else could you explain how he emerged from his difficult childhood so utterly loving, hopeful, and compassionate? He was born on December 12, 1971, in Okinawa, Japan, to Thasinee Tiensiripipat, of Bangkok, Thailand, and an American military officer. His resilience was tested over and over again: by his father’s abandonment; his move to Bangkok, then Denver; his mother’s death; his move to Casper, Wyoming to live with his aunt, Malee Chen (from then on, “Mom”) and his uncle, Joseph Chen (from then on, “Pop”) and his first cousin, Nat (always, frankly “little sister”); his move to London, Ontario after his parents’ divorce; his parentless years in high school there.

The difficult milestones of his youth made way for all the amazing ones that came after. He was the boy from two broken homes who went on to have an unbreakable will and, in high school and university, an unbreakable body to match. In high school, he played basketball, was swimming MVP, ran cross-country, sprinted, hurdled, broke a 51-year-old Ontario long-jump record, and sang in chamber choir, where his baritone and his dance moves were given their proper place to shine. His awards and medals piled up, and not just for sports. He won the Ernie McTavish Award upon his high school graduation (given by the Ontario Secondary School Teacher’s Federation in London for exemplary citizenship). At the University of Western Ontario, he competed in the 60-metre dash and long jump and went to the Canadian National Track and Field Championships when there was no funding to send the best athletes – his coach paid for him because Chris, as always, inspired hope.

He was the boy marked by early tragedy and instability who would go on to find absolute joy with “his person,” Kim. He had grown allergic to commitment but was instantly smitten when he met her. He wooed her with his singing and his poems and left his life in Toronto to be with her. They had both lost their parents in the same year when they were younger (just months apart): strangers sharing the same loss at the same time on opposite ends of the country, meeting decades later. This would be the only time Chris, in a private conversation with his sister, would ever confess to a belief in fate. They were married at the Little Chapel of Love in Las Vegas on November 26, 2004, surrounded by family members. It was small, intimate, full of love and laughter, and so them. They had just gotten engaged, but they would be in Vegas for Thanksgiving anyway, so why not combine a wedding and a family event? That was their rare combination of spontaneity and practicality – they were gamblers, but they were so careful with what they loved most.

Each year of their marriage, they took turns planning the anniversary. It was never big or showy, because their life together revolved around the simple pleasures. They were happy just being together, from the first anniversary – with the bad steak that tasted like liver but the beautiful anniversary band Chris had given her to fit her swollen, pregnant fingers – to the very last one spent in bed the weekend before he passed away, where she made him his favorite dish (her enchiladas) and despite how his brain tumor had impaired his language, he spoke sentences to her, only for her, that she could understand and that even made her laugh. Over the years, he had always made her laugh, even when she didn’t want to.

He was the fatherless boy who was the most attentive and involved father to his children, passionate about giving William and Thassy both a moral compass and an awesome sense of humor. He was always up for family pranks and jokes around the dinner table. With Kim, he created a home full of warmth, love, security, and so many family rituals (board games, Free-for-All Fridays, Dairy Queen Dinner, summer beach trips, nightly ice cream on the couch with Mama Lois, and many more).  He was not a prideful person (he kept his own medals and accolades in a box at his mother’s house), but he was immeasurably proud of William and Thassy.

Caring for others was the primary focus of his life despite his professional accomplishments. He was a sponge for technical information and complex ideas and worked as an IT professional in Toronto, Maryland, and Virginia. He regularly took calls from family members for hardware and software expertise. He understood the unfathomable ins and outs of blockchain and crypto.

He didn’t subscribe to any religion, but he did live by a personal philosophy built around the care of others. He took care of his little sister Nat like a father when they were on their own, coached middle school athletes as a high school track star, and taught his little brother Austin during his time with him in Las Vegas, when Austin was still young, that the definition of a good man was someone who took care of not just himself, but his family and others around him. That lesson persists in who Austin is to this day, as a father and as a man. Chris was brilliant at anticipating the needs of others, always went above and beyond to let others know how much he valued them and was famous for giving people any possession of his he thought they should have, in the spur of the moment and with the purest generosity. He shared everything he had so willingly because the truth was he never cared very much for material things. He cared about who people were, what they were feeling, and how he showed up for them. Putting those he loved first before himself was how he lived, from when he was a boy to the very end.

In keeping with Chris and Kim’s commitment to community service, memorial donations in Chris’s honor can be made to the following organizations in lieu of flowers (special thanks to our guardian angels Dawn, Jennifer, Sharon, and Michelle of Frederick Health Hospice, and the 3b nursing staff at Frederick Memorial Hospital):
•    National Brain Tumor Society: https://braintumor.org/take-action/give/memorial-giving/
•    American Cancer Research: https://runsignup.com/forchris
•    Frederick Health Hospice: https://www.frederickhealthhospice.org/Obituary-ILO-.aspx

To order memorial trees or send flowers to the family in memory of Christopher F. Chen, please visit our flower store.