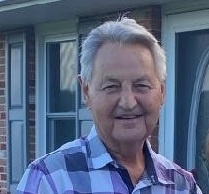 Darwin Gene Lawson, 84, of Mount Airy, passed from this life on Thursday, May 5, 2022 at his home.  He was the husband of Sue Lawson.  Born on September 6, 1937, in Fountain Mills, MD, he was the son of Clyde Leroy Lawson, Sr. and Mazie Eudora Lawson.

Darwin was a route driver for Ideal Farms Dairy for 24 years, later working for Maryland Virginia Milk Producers Association, where he retired after 25 years.  He was a lifelong member of Jehovah's Witnesses, belonging to the Monocacy Congregation since 1957.  Darwin loved planting his garden and sharing it with others.

The family will receive friends from 11:00 am to 12:00 pm on Saturday, May 14, 2022 at Stauffer Funeral Home, 1621 Opossumtown Pike, Frederick, where a funeral service will be held at 12:00 pm, immediately following the visiting hours.

To order memorial trees or send flowers to the family in memory of Darwin Lawson, please visit our flower store.