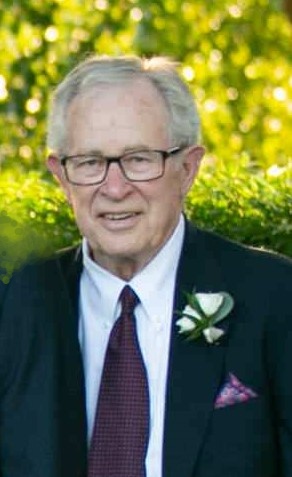 Dave was born September 18, 1932 in Manistee, Michigan. He was preceded in death by his beloved wife of 53 years, Mary Lou Peterson (Palm); and daughter Kathy.

He graduated with a BS from Western Michigan University with further graduate studies at Michigan State University.   He served in the U.S. Army and worked for over 30 years at IBM primarily in the Washington, DC area.

Dave enjoyed sports, antiquing and travel, and led a full life loved by his family.

He is survived by his sons Jeff, John, and David (Melissa); grandchildren Eric, Brian, Claire, Sarah and Caroline; and his Michigan nieces and nephews.

He was preceded in death by his brother Ron of Charlevoix, Michigan; and companion of eight years, Carole Brown of Grand Rapids, Michigan.

Services will be private, and interment will be at a later date at Rosedale Memorial Park Cemetery in Grand Rapids, Michigan beside Mary Lou.

In lieu of flowers, memorial contributions may be made in his name to the National Multiple Sclerosis Society (www.nationalmssociety.org).

To order memorial trees or send flowers to the family in memory of David Peterson, please visit our flower store.