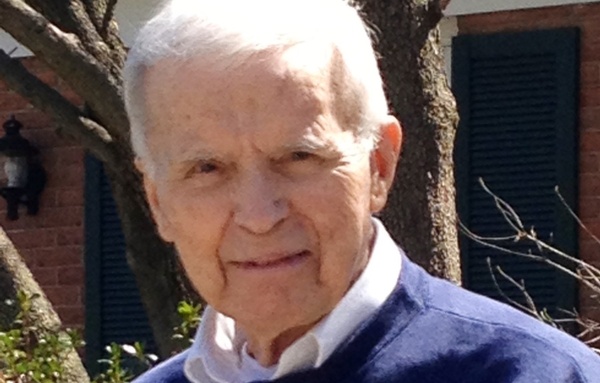 Donald Vernon Torr, age 95, peacefully passed from this life on October 21, 2021. He was the loving husband of his late wife, Nancy (Detjen) Torr, for 62 years.
He leaves behind two daughters: Leslie Winkelman (Peter) and Sally McAleer (Patrick); six grandchildren: Alison McAleer Brady (Nathan), Carolyn McAleer Halterman (Matthew), Grace McAleer Middleton (Steven), Patricia McAleer Vasquez (JC), Matthew Winkelman (Brooke) and Christopher Winkelman (Natalie); thirteen great grandchildren; two brothers: Gilbert Torr (Ardis) and Jay Torr (Linda). He also leaves behind many nieces and nephews. Two sisters, Evelyn Weeks and Doris Underwood, predeceased him.
Donald was born in Clinton, Iowa on Flag Day, June 14, 1926, to Bert A. and Lula Hart Torr. The family moved to Webster Groves, Missouri in 1941 where he met his high school sweetheart and the love of his life, Nancy. Upon graduation from high school, he joined the United States Navy. He was discharged from the navy at the end of the war in 1945 and he entered Washington University where he eventually received his Ph D in education in 1952.
His career began with the NSA in Washington DC as Psychologist. He next worked for General Electric in an Information Systems Operation and then for Sterling Institute managing an Educational Technology Center.
He ended his career at Gallaudet University where he worked as: professor in the graduate school Education Department; Director of an Office of Educational Technology; Assistant Vice President for Pre College Resources. During his time at Gallaudet he was instrumental in creating closed captioning for the hearing impaired. He retired in 1991 as an individual contributor in the Computer Center.
His retirement life was a full one with all of his many interests and volunteer work. He was an amazing gardener, artist, runner, writer and Tai Chi fan. He never tired of learning and was an avid reader, always curious to know about spirituality, science and religion. He was greatly interested in politics with strong views about how things should thoughtfully be done. He generously gave of himself to the Coalition for the Homeless writing grants to help facilitate a new men’s shelter in Rockville, Maryland. Awards he received from those he helped are numerous and his family has been blessed to have him as a stellar role model for how to live a good and successful life. Family remained a constant priority, spending as much time as possible with his children, grandchildren, and great grandchildren and all will miss his quick wit and fun sense of humor.
To order memorial trees or send flowers to the family in memory of Donald Torr, please visit our flower store.