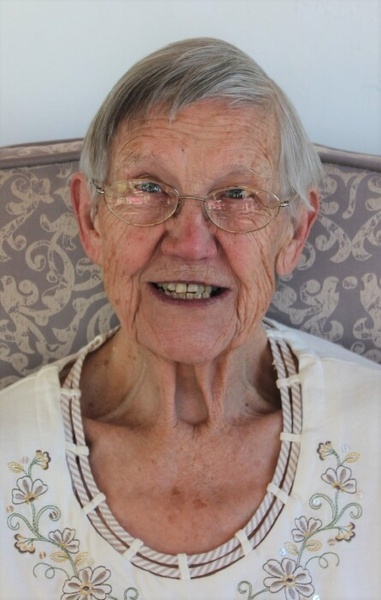 Dorothy H. Plumer (86) known to those who loved her as “Dottie”, entered life eternal on August 26th.   She was born and raised on Homestead Farms outside Middletown, along with her brother and 4 sisters.  Her parents, the late Josephus and Margaret Beachley Huffer, instilled in her a strong work ethic and love for family and agriculture.
After graduating from Middletown High School, Dottie worked with her brother Donald on the family dairy farm for many years.  After 15+ years of milking cows she turned in her gum boots for a sewing machine and became a seamstress at Claire Frock Company in Thurmont.  Because she was working in Thurmont, two of her brother-in-laws figured out she needed to meet Louis (Lou) Plumer, a long time bachelor farmer in Creagerstown.  Thanks to Jim and Mehrle the connection was made and in less than 6 months there was a wedding to plan.
When Dottie married Lou she found his cabinets empty, except for a jar of peanut butter and a box of Corn Flakes.  She filled his cabinets, his refrigerator, his freezer but most importantly his heart.  Lou now had a life partner in Dottie.  Dottie got her gum boots back out and worked with Lou on the farm, milking cows and gathering eggs.  When folks stopped by Fountain Low farm to buy a dozen eggs, they could always count on being greeted warmly by Dottie and Lou.  They served the community through their church and as active members of the Grange.
In 1991 they retired and moved to the big metropolis of Thurmont.  They spent their spare time growing a beautiful garden, playing cards with friends, and enjoying many bus trips across the United States.
In 2003 Dottie lost her soul mate.  She would often say her years with Lou were the best years of her life.  In 2016 she decided to join other family members and became a resident of Homewood.  You could find her there pushing her rolling walker up the hall to visit Jim, Greta, Mehrle and Thelma.  Knitting with the Knit Wits, playing bingo, and generally entertaining anyone she met.  To know Dottie was to laugh with Dottie.  Her boisterous laugher will be greatly missed by all.
Dottie’s family will be forever grateful for the love and care she received at Homewood as she moved thru the various levels of care.  Her final weeks in Hospice added another level of loving caregivers.
She is survived by her sister Josephine Remsberg and many nieces and nephews and their families.  Immediate family members that predeceased her were Donald and Greta Huffer, Julian and Edna Mae Oliver, Jim and Louise Stup, Mehrle and Thelma Ramsburg and Leon Remsberg.
In lieu of flowers it is requested that donations be directed to Frederick Health Hospice

A celebration of life will be held at Brookfield Farms (8302 Ramsburg Road, Thurmont, MD) on Sunday September 5th at 1:00 p.m.

To order memorial trees or send flowers to the family in memory of Dorothy "Dottie" Plumer, please visit our flower store.