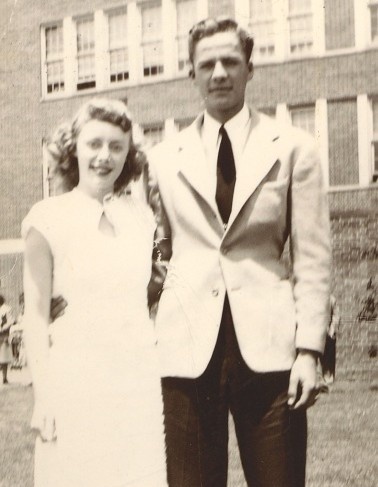 Earl B. Thomas, 92, a lifelong resident of Frederick County, passed peacefully surrounded by his family on August 4, 2021. He was the adoring husband of Gloria Thomas, his wife of 73 years, who pre-deceased him in December 2020.

Born on January 28, 1929, in Adamstown, MD he was the son of Alonzo R. and Ollie Mae (Page) Thomas who operated a farm near Buckeystown, MD.  He and his future wife Gloria graduated from Frederick High School in the class of 1946.  They married in 1947. He was a member of the Church of the Brethren.

Earl is survived by his son, Gary L. Thomas and wife Frances I. Thomas of Columbia, MD, grandson Justin F. Thomas and family, granddaughter Kaitlin E. Thomas, PhD. and family, and cousins Sally Summers and Edward Lee Page of Tuscarora, MD. He was pre-deceased by his sister, Betty Smith of Ijamsville, MD.

Earl left farming and joined the B&O Railroad in 1951 as a Signalman on the B&O Old Main Line where he worked 42 years retiring as a Maintenance Foreman for CSX in 1993. Subsequently, he worked for the Frederick County Public Schools delivering school lunches for 15 years.

In retirement, Earl became an accomplished woodworker crafting reproduction early American furniture and folk art pieces, hand carved figures of Civil War soldiers and Santa Clause figures, and other craft items. He loved working in his yard, fondly referenced as “the Farm”, vegetable gardening, metal detecting, hunting and fishing, and most fondly, travel with his wife Gloria and family gatherings.  He became an avid reader of American history in his later years.  Our beloved ‘Papa’ will be treasured and missed by all who knew him.

Services will be private. Arrangements are with Stauffer Funeral Home.

Expressions of sympathy may be shared with the family at www.staufferfuneralhome.com .  Donations to Frederick Health Hospice will support their amazing compassionate and supportive work.

To order memorial trees or send flowers to the family in memory of Earl Thomas, please visit our flower store.