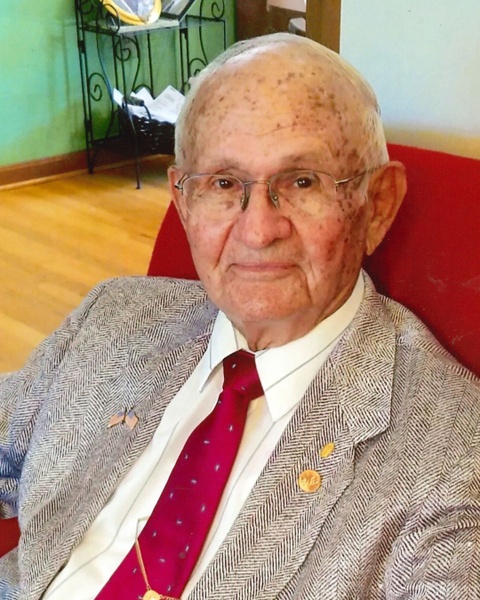 Earle Lynwood Browning, age 98, passed away on Oct 4, 2022 at his home in Mount Airy, Maryland. He was the husband of the late Mary Helen Brandenburg Browning, his wife of 62 and one half years who passed away on February 3, 2010. They were married on August 30, 1947.

Born on February 28, 1924, near Kemptown and Browningsville, Maryland, he was the son of the late J. Monroe and Nannie L. Thompson Browning. His father was born in 1873, eight years after the end of the Civil War and three years before Custer's Last Stand. With his passing, Mr. Browning was the last of eight siblings. He graduated from Frederick High School in 1941. He attended Vanderbilt University for a time under the Army Specialized Training Program. Mr. Browning served in the 106th Infantry Division during WWII and received four battle stars, including one for participating in the Battle of the Bulge. He attended college under the GI Bill of Rights, earning a BS degree, majoring in accounting.

Mr. Browning retired in 1979 with 38 years of Federal service. At the time of his retirement, he was the comptroller of the National Cancer Institute, a part of the National Institutes of Health. He was very involved in managing the increase funding by Congress in 1971, when President Nixon replaced biological warfare research with cancer research at Ft. Detrick.

Mr. Browning was a long time member of Providence United Methodist Church in Kemptown, serving on a number of committees. He was a member of the Sons of the American Revolution, and an active member of the National Association for Active and Retired Federal Employees. In 2016, he was inducted into the State of Maryland Senior Citizens Hall of Fame for his volunteer services. Mr. Browning was a life member of the New Market District Lions Club; in 2022 receiving the Progressive Melvin Jones Award, the highest award given by the Lions Club International. Up until the time of his passing, he prepared tax returns for many family and friends. He was the President of the Brandenburg Reunion from 1979 until the time of his death. Mr. Browning was also the President for the Browning Reunion for many years.

Mr. Browning dearly loved his family and received outstanding support from all of them. From time to time, he would say to them, especially his daughter Lynette:" Don't put off until tomorrow what you can do today". He and Mary Helen loved to travel. Mr. Browning was a very kind and outgoing person, always trying to help others and loved "hugging the ladies". He told his family that when his time is up, he would like to die with his boots on, either among his Christmas Trees or vegetable garden. When he turned 90, many people asked him the secret of living so long; his answer was always the same: "Stay active and love everyone".

The family will receive friends from 2-4 and 6-8 PM on Sunday, October 9, at Stauffer Funeral Home, 8 East Ridgeville in Mt. Airy where a celebration of his life will take place at 11:00 AM on Monday, October 10. His pastor, DD Adams will officiate.  Interment will be at Providence United Methodist Church Cemetery, Kemptown.

In lieu of flowers memorial contributions may be made to Providence United Methodist Church, 3716 Kemptown Church Road, Monrovia, MD 21770.

To order memorial trees or send flowers to the family in memory of Earle Lynwood Browning, please visit our flower store.