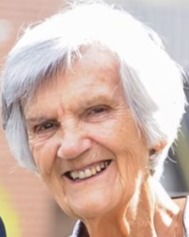 On December 19, 2022, Eileen Mae Pease, age 89, of Huntington, IN, passed away at Lutheran Medical Center in Ft Wayne, IN surrounded by family.
Eileen was born in Garfield, MD on February 15, 1933 to the late Leah V (Toms) and the late Kenneth Cline.  She graduated from Middletown High School in 1951 and went to work as a clerk for the FBI in Washington DC.
Eileen married Robert G. Pease (of Bernardsville, NJ) in Basking Ridge, NJ on August 21, 1954. Eileen lived in Warren, NJ, with her husband and four children. While there, she was a member of the Basking Ridge Presbyterian Church and later helped establish the Trinity United Church of Warren. For many years, she worked at the Warren Town Hall in the Office of the Building Inspector.
In 1976, she and Robert moved to Huntington, Indiana where they created a homestead together, building their house and raising fruits and vegetables. She also raised flowers that for several years were sold to local florists and at craft fairs.
Eileen had a passion for history and loved to read and travel. She enjoyed being in her home with her feline companions, watching birds, caring for her plants, and baking for family and friends. For those who knew her, she will be greatly missed and will be forever in our hearts.
She is survived by her children: Patricia G. Lindsley of Manassas, VA; Mary Lu P. Roszko of Brush Prarie, WA; Robert M. (Dera) Pease of Auburn, IN; and Katrina A. (Robert) Beckley of Madison, VA; grandchildren: Keith S. (Nicole) Lindsley, Lindsay M. Roszko,  Drs. Robert C. (Susan Keen) Pease, Jared M. Pease, Christopher A. Pease, Hannah L. Beckley, Aaron M. Beckley and a great-grandchild: Eileen L. Pease.
Also surviving her are her siblings: Ken (Jean) Cline, Connie Herd, Jeannie Funk, Donald (Pat) Cline, Patricia (Billy) Kline, and Robert (Mary) Cline.
Preceding her in death are her husband of 67 years, Robert G. Pease; sister, Virginia L Cline; son-in-law, Stephen Y Roszko, Jr, and granddaughter, Kathryn M Lindsley.
A visitation will be held from 10:30 AM through 12:00 PM on Friday, January 6, 2023 at Mt. Bethel United Methodist Church, 14110 Stottlemeyer Rd. A funeral service will start at noon at the church. After services, there will be a repass at the church for all in attendance to share in fellowship.

Memorial contributions may be made in her name to Mt. Bethel United Methodist Church.

To order memorial trees or send flowers to the family in memory of Eileen Mae Pease, please visit our flower store.