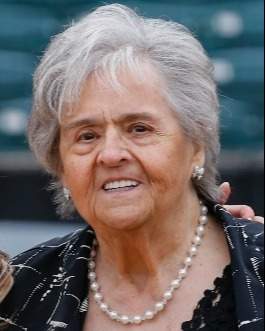 Elaine Mae (Behe) Castine, “G,” was born in Johnstown, PA., on December 16, 1934 to Anna Marie Albus Behe and John Behe. On August 31, 2022, surrounded by family, with Motown playing quietly in the background, her spirit peacefully freed itself from physical pain and exited via an open window.
She is survived by her children: Earl R. “Pete” Castine, Jr. (Cindy), Jack Castine, Ellen Castine Staub-Smith (Rick) and Lee Newman. Additionally, Tina Spencer and Michelle Castine became lifelong daughters. Her legacy includes grandchildren, Tiffany Elaine Cooke (Brad), Craig Castine, Samantha Fricke (Rich), Jack Staub (Blake), Maggie Castine, Jennifer Castine, Sara Norris (Jason), Emily Riddle (Martin) and five great grandchildren. She is also survived by her brother, John R. Behe (Mary).
Elaine was predeceased by her husband of 64 years, Earl R. Castine, Sr. Always with a big grin and a chuckle, I’m sure he greeted her at the pearly gates, “Hey ol’ lady!” She was also predeceased by her parents; her sisters, Edith Ann and Jean Marie; and her brother Donald and his wife, Dorothy. Elaine is survived by many, many grown “kids” who cherished her as Mom and Grandma, as well as many nieces and nephews.
Elaine was born and raised in Johnstown, PA. She survived the flood of 1936 and would prove to remain a very strong and resilient soul. She was curious to learn and could teach herself how to do anything. She joined the Girl Scouts, the Boy Scouts, Latin Club, and Thespians. She rode her horse, Tony, and learned to play the violin.
Elaine met Earl when she was 14. Their adventure began in 1954, when they wed in Johnstown. Pete was born soon after. A few years later, they moved to Binghamton, NY for Earl’s job. During this time, their second son Jack was born. In 1961, the family moved to Washington, DC for Earl’s dream job as a broadcast engineer with VOICE OF AMERICA. In 1977, Elaine began working for Westat in Rockville and worked there for 25 years until her retirement.
Earl and Elaine settled in Silver Spring, MD., where their third child Ellen was born. Elaine would quickly become absorbed in everything pertaining to her children and her community. At one point she was the longest running PTA president at Viers Mill Elementary. She organized incredible talent shows that are still talked about, winter carnivals, enrolled numerous students in kindergarten, taught ESOL and sewed costumes for whoever needed them. She was Mom or Grandma to everyone. “Don’t say can’t,” was often heard at our house, along with “Go get the dictionary!” This advice was directed at any and all children in her home. An incredibly talented seamstress, there was nothing she couldn’t crochet or sew. She made fourteen wedding dresses, including one that won first place at the county fair. If you attend her service and she’s ever crocheted/sewn something for you, please bring it to share!
Born to be a grandmother, Elaine knew exactly her role and far surpassed it. Whether traveling to Texas, Florida, North Carolina, or here with the Maryland grandkids, each has different treasured moments. She was fully invested in Sam’s and Jack’s sports. For several years, she was a big part of the Damascus Hurricanes Fastpitch Softball organization. She loved traveling with Sam to all the fun places that softball took her. She was also a Linganore Lancer fan for life, because both grandchildren played sports there. She could be seen in the football bleachers, the softball field and on the basketball court sidelines. Some of these athletes became like grandchildren to her. She watched Sam play softball in college and Jack play football in college. She was also a huge Pittsburgh Steelers fan.
The family will receive friends on Friday, September 9, 2022 from 4:00pm to 8:00pm.  A Celebration of Life will be held at 7:00pm at Stauffer Funeral Home, 8 East Ridgeville Blvd. Mount Airy, MD 21771.  Interment will be private.  Our family would like to thank Frederick Hospice and Megan Putman for the stellar care they provided to our Mom. A special thank you to Ursula and Sakeena, from Hospice.
Donations in Elaine’s name may be made to: Frederick Health Hospice OR Linganore High School’s softball, basketball or football programs.