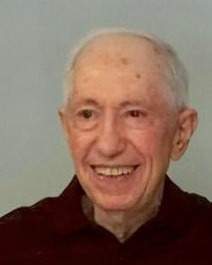 He was born on August 9, 1927, in McKeesport, PA to the late Elias and Aurora (Gomez) originally of Cordoba, Spain.

Eli was a Navy Veteran and, upon his retirement from Continental Can Company, drove a West Mifflin Area School Bus.

In 1999, Eli and his wife decided to move to Frederick, MD, to be closer to family.

He was a member of St. Joseph on Carrollton Manor Catholic Church and a 4th degree member of the Knights of Columbus St. John’s Council #1622.
Eli enjoyed golfing, walking for miles, playing pool at his community clubhouse, reading, and puzzles.

He was a devoted "PapPap" to Joe (Ingre), John (Rachael), Jessica, Christopher (Kim), Emily, Daniela, Bobby and Adrianne; great "PapPap" to Scarlett, Thatcher, Ethan and Caleb, brother to Josephine Moore and Uncle Eli to his many nieces and nephews.
Eli was also preceded in death by sisters Maria Roberts and Lee (late Bill) Rhodes.

To order memorial trees or send flowers to the family in memory of Elias Munoz Jr., please visit our flower store.