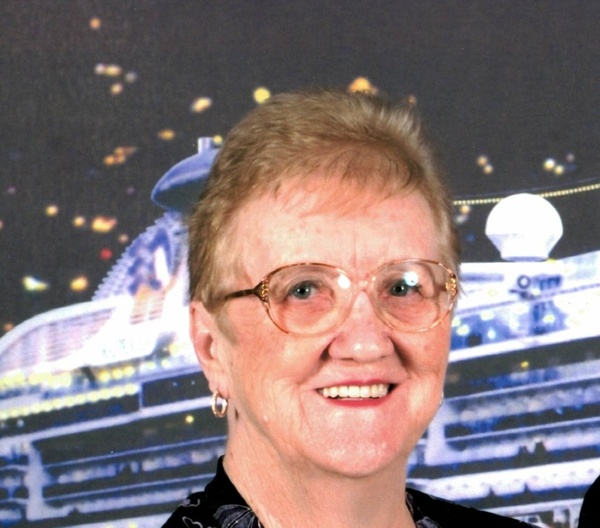 Esther Mae (Timmons) Jewell passed away peacefully at Frederick Health Hospital on Friday, November 5, 2021 with her family by her side. She was born on February 10, 1932 in Snow Hill, Maryland and was the daughter of Herman and Kathryn (Lewis) Timmons.
She lived 56 years in Monocacy Village, Frederick, with her husband of over 70 years Clarence “Pete” Jewell, Jr. She was preceded in death by son Christopher.  She is survived by her son Clarence “Chip” Jewell, III, and his wife Kathy; daughters Cindy Clary; Risa Jewell and Casey Harrington and her husband Jim. She is also survived by grandchildren, George “Bubba” Clary and his wife Danielle and great grandchildren Erika and Andrew;   Curtis Jewell and his wife Julia, great grandchildren Clark and Coretta; Kristin Zoller and her husband Zack and great grandchildren Nora, Ian and Isla; Chris Clary and fiancé Mallory Smith; Bill Harrington and his wife Alexa; Mike Harrington and his fiancé’ Jennifer Kellogg; Jamie Harrington and nephew Terry Morgan. She also enjoyed visits from her grand “furson” Boo.
Esther was first and foremost a nurse working in the 1950’s at the Frederick Emergency Hospital and Frederick Memorial Hospital before working many years with Dr. B. O. Thomas, Jr. and Dr. L. T. Davis. She worked over 20 years with the State of Maryland at the Springfield State Hospital and the RICA Center in Montgomery County. Upon retiring from the state, she continued working at various agencies in Frederick including the Frederick County Health Department, Substance Abuse Project at the Frederick County Detention Center, Jeanne Bussard Workshop and Somerford House until finally retiring at age 83.
She was an avid duckpin bowler and enjoyed camping with “Pete’s Pals” in their Coachman camper having camped in all 49 continental states. She served as a volunteer EMT with the Junior Fire Company and enjoyed occasional trips with her husband to Charlestown or Atlantic City.
She received her nursing “cap” from the nursing program at the Victor Cullen State Hospital. She earned her Associates Degree in Nursing from Hagerstown Junior College, her Bachelor’s Degree from Mount St. Mary’s University, MBA from Frostburg State University and additional graduate work in psychology at Hood College.
The family would also like to express special appreciation to the neighbors of 56 years, Mr. & Mrs. Galen Cornell for the helping hands when needed and special friend Terry Fox for her support. The family is also very grateful for the nurses, doctors and staff of Frederick Health Hospital for providing excellent care and compassion in her final hours and the care provided by the crew of the Walkersville Ambulance and Frederick County Advanced Life Support. Thank you all so very much.
A viewing will be held at the Stauffer Funeral Home, 1621 Opossumtown Pike, Frederick on Thursday, November 11, 2021 from 6:00PM to 8:00PM. The funeral will also be conducted at the Stauffer Funeral Home at 11:00AM on Friday, November 12, 2021 with interment at the Mt. Olivet Cemetery in Frederick. . For the health and safety of everyone attending, please wear a face mask.  In lieu of flowers, donations may be sent in her name to the charity of your choice.
Funeral services will be live streamed https://vimeo.com/event/1475237

To order memorial trees or send flowers to the family in memory of Esther (Timmons) Jewell, please visit our flower store.