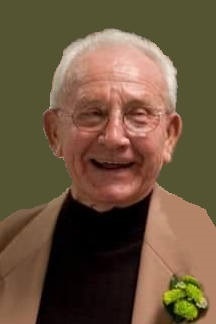 Eugene (Gene) Harrison Green, 94, of Rosemont, Maryland, passed from this life on Sunday, May 22, 2022, at Citizens Care and Rehabilitation Center in Frederick, MD.  He was the beloved husband of Mary Lou Green for 56 years.  He was the last of his immediate family.

Born on April 19, 1928, in Lovettsville, VA, he was the son of the late Daniel Harrison and Lillian (Connor) Green.

Gene worked as a Carman for the B&O; Chessie System; & CSX Railroads retiring after 45 years. He was Local Chairman of the Brotherhood Railway Carmen Union from 1967 to 1989. He coached Little League; Babe Ruth; Legion; and Maryland State League baseball for many years, winning some title games along the way. He loved his Texas Rangers. He was member of the Frederick Eagles #1067; life member both the Moose Lodge #948 Charles Town & the Red Men Lodge 84 Williamsport,Sons of Steadman-Keenan American Legion Post 96, Brunswick ; and Petersville Luther Chapel.  He loved to plant a big garden every summer and putting out produce on his little roadside stand. He enjoyed The Great Frederick Fair, but one of his greatest pleasures was watching his son, Bryan race, the #99 car.

A celebration of Gene's life journey will take place at 11AM on Thursday, May 26, 2022, at Stauffer Funeral Home, PA, Brunswick.  Jim Pope will officiate.  Interment will be at Lovettsville Union Cemetery in Lovettsville, VA.

To order memorial trees or send flowers to the family in memory of Eugene (Gene) Green, please visit our flower store.