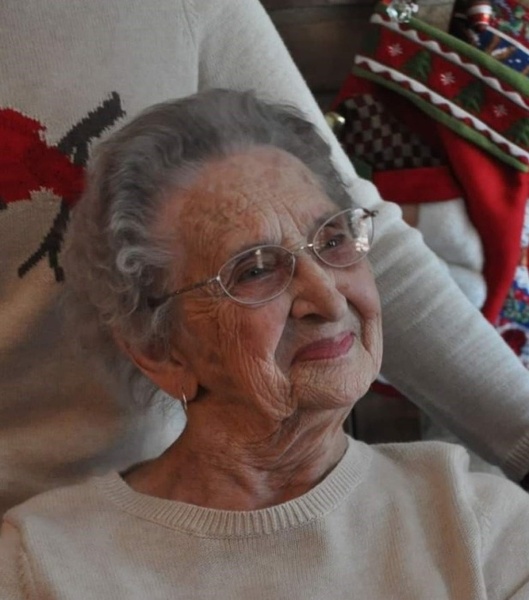 Evelyn Marie Norris, 96, died on Friday, November 5, 2021, at Citizens Nursing Home. She was the wife of the late Charles R. Norris of Knoxville, MD. Born on August 27, 1925, in Lovettsville, VA, she was the daughter of the late Mary “Ruth” Fawley Myers Baker and James Lamar Myers. In addition to her parents and husband, she was predeceased by several brothers-in-law and sisters-in-law, including her close friend and sister-in-law Della Mae Myers.

After graduating from high school, Evelyn lived in Leesburg, VA and worked at the Pentagon as a cashier during WWII. Once married, she worked as a mother and homemaker in Knoxville and later Brunswick, MD. She tragically lost her husband Charles in 1976 and never remarried. She loved her Church and Church family. Evelyn was a talented cross stitch and latch hook artist, giving many beautiful pieces as gifts that are still cherished by her family and friends. She loved Northern Cardinals and amassed a collection of figurines, clothing, and other items. Evelyn was a kind and inquisitive person who enjoyed conversation. She had a unique flair and was known for her uncensored communication style. Evelyn was a beloved “Mamaw” to her grandchildren and great-grandchildren, who delighted in her sense of humor and one-liners. Evelyn will be deeply missed, but we rejoice in her memory and a long life well lived.

A memorial service will be scheduled in 2022.
In lieu of flowers, memorial contributions may be made to Bethel Lutheran Church, P.O. Box 307 Lovettsville, VA 20180.

To order memorial trees or send flowers to the family in memory of Evelyn Norris, please visit our flower store.