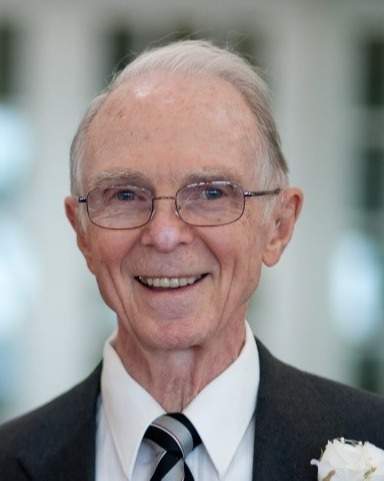 Gene Beall, 96, years young, passed peacefully from this life on Tuesday September 13, 2022 at the home of his daughter in Tuscarora, MD.

Born April 22, 1926 in Sumter, SC to the late Herbert Wharton Beall and Fanchon Anna Wernke, the youngest of four brothers.  He spent his childhood in Sumter, SC, graduated from Edmunds High School in 1943.  He enlisted in the Navy in 1944 with dreams of becoming a pilot, but with enough pilots serving he became to an Aviation Electronic Technician. He then continued his training at the University of SC and correspondence courses after the war ended.

Gene married Frances Graham on June 27, 1947 and celebrated their 70th wedding anniversary together before she passed in August 2017.  Frances and Gene had two girls, Betsy and Cyndi. They were blessed with three grandchildren and four great-grandchildren.  The Bealls raised their family in Montgomery County and later retired to Frederick.

In 1948, he moved to Washington, DC to take a job at the radio station WOIC that then became Channel 9, WUSA. Gene was part of the original 30 members of the station that helped prepare it for its first broadcast on 1949.  He knew Walter Cronkite, Edward R. Murrow and other notable early TV personalities.  He retired from broadcasting after 42 years.

A 57-year member of the A.R.E, Gene relished teaching others about Edgar Cayce’s life and sharing information from the health readings about body, mind and spirit.  He enjoyed gardening, reading, big band music, playing cards and emailing jokes to his friends.  His passion for helping others lead Gene to be a tutor for the Literacy Council of Frederick County where he met a couple of dear lifelong friends.

In lieu of flowers, memorial contributions may be made to Frederick Health Hospice.  Expressions of sympathy may be shared with the family at www.staufferfuneralhome.com.

To order memorial trees or send flowers to the family in memory of H. Eugene Beall, please visit our flower store.