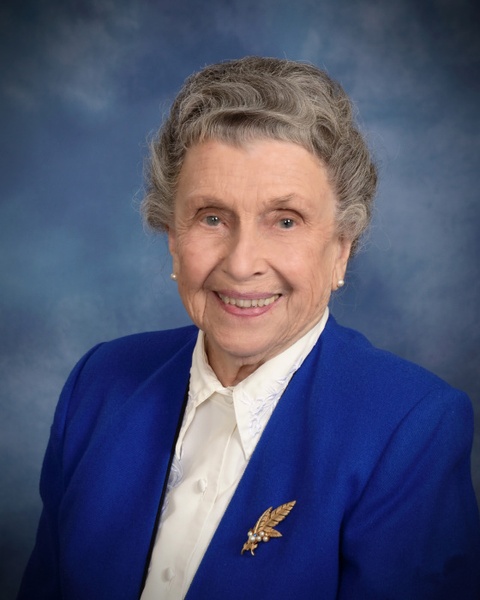 She attended elementary and secondary school in Mount Airy, graduating from Mount Airy High School in 1934.  She was a day student at Western Maryland College until her senior year, when she lived on campus and greatly enjoyed campus life.  She graduated from Western Maryland College (now McDaniel College) in 1938 and became a teacher of biology and home economics at Manchester High School.  On June 15, 1941, Helen married Vernon Reynolds “Ray” Simpson, who she had met at college.   After the Pearl Harbor bombing, Ray joined the army and the young couple moved to Fort Hood Texas for training.  In Texas, their first child, Diane, was born.  While Ray was in Europe during the war, Helen and Diane returned to Mount Airy to live with Helen’s widowed mother.  When Ray returned from the war, the pair decided to make Mount Airy their home, building their own house in town. They added John and David to the family and raised the three children in Mount Airy.

Both Helen and Ray became active within the community.  Helen served as chair of the Ways and Means committee at the PTA and began what became The Mount Airy Players as a means for fundraising for the PTA.  Thus began a forty-year commitment to the local theater group.  Helen produced, publicized, directed, costumed, and appeared on stage for many bi-annual plays.  Helen was also involved as a Cub Scout leader, served as chair of the Heart Fund Drive in Mount Airy, was active in the Mount Airy Garden Club, and was busily involved in the activities of Calvary UMC in Mount Airy. Helen was the first woman lay leader of Calvary and served for many years as church historian.  She was also integral to the drama program for children and youth at Calvary, writing pageant plays, directing, and costuming these efforts.   Because of her dedication to the community, Helen was recognized by the Historical Society of Mount Airy and inducted into the Mount Airy Hall of Fame in 2002.

Following the death of Ray in April 2000, Helen continued to enjoy her gardens, her home, her church involvement, and her family.  During the last few years, Helen moved to a senior community in Wildwood Park of Mount Airy.  Here, she could enjoy continuing to live independently, to have small garden projects, to enjoy cooking for herself, and to take exercise classes at the nearby Senior Center, In the last few weeks, following a fall in her home, she has been a resident at Golden Crest Assisted Living in Westminster Maryland, where she greatly enjoyed her caretakers (especially Lori) and her meal companion, who, at 102, could share memories of the Carroll County area.

Visitation is scheduled from 5 to 7 p.m. on Sunday, November 7th, 2021 at Calvary UMC, North Main Street, Mount Airy. There will also be visitation from 1 to 2 p.m. on Monday, November 8th, followed by a Celebration of Life at 2 p.m. at Calvary UMC, Mount Airy.  Please note that masks are required of everyone in the church building.  The Celebration of Life service will be live-streamed via the church Facebook website, https://www.facebook.com/CalvaryMtAiry .   Graveside services at Pine Grove Cemetery will follow the church service.

Those wishing to contribute, in Helen’s memory, may send donations to Calvary UMC , 403 South Main Street, Mount Airy Maryland.  Another of Helen’s favorite charities is World Vision at worldvision.org or World Vision, Inc, PO Box 70172, Tacoma WA 98481. Expressions of sympathy may be offered to the family at StaufferFuneralHome.com.

To order memorial trees or send flowers to the family in memory of Helen Simpson, please visit our flower store.