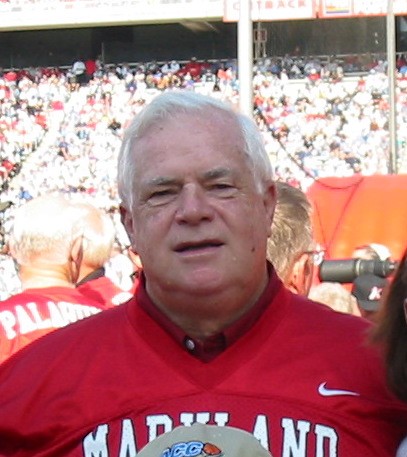 James Thomas Skarda, 87, of Frederick, MD, and previously of Baltimore, MD, died peacefully on April 6, 2022, at VindobonaNursing and Rehabilitation Center. He was married to the former Mildred L. (Jill) Williams for 63 years, until her death in 2020.

Jim was born in Baltimore on August 25, 1934, to the late James John and Josephine Marie (nee Svoboda) Skarda. He attended St. Wenceslaus School and Mt. St. Joseph High School, both in Baltimore. Recruited by Coach Jim Tatum to play football for the University of Maryland Terrapins, he was a member of the 1953 National Championship team and played in the 1954 and 1956 Orange Bowl games. He graduated from Maryland in 1957 with a Bachelor of Science degree in Mechanical Engineering. After short stints at Martin Company and at Aircraft Armaments Inc., he joined Westinghouse Defense and Electronic Systems Center in Linthicum, MD, where he worked for 34 years as a structural engineer designing installations for ground-based radar systems. Jim was a Professional Engineer and a member of the Knights of Columbus. He coached Little League football and baseball for the Loch Raven Recreation Council.

Jim and Jill raised three children in Hillendale and Towson, MD. After retirement, they traveled and sailed and enjoyed participating in the lives of their grandchildren and great-grandchildren. In 2014 they moved to Edenton Retirement Community in Frederick, MD, to be closer to family.

The family will receive friends from 10 to 11 am on Monday, April 11, 2022, at St. Joseph-on-Carrollton Manor Catholic Church, 5843 Manor Woods Road, Frederick. A Mass of Christian Burial will be celebrated at the church at 11 am. Burial will take place following the service at Resthaven Memorial Gardens. In lieu of flowers, contributions in memory of Jim may be made to Marine Corps Toys for Tots, www.toysfortots.org ; or to Catholic Bishop of Northern Alaska, www.dioceseoffairbanks.org .

To order memorial trees or send flowers to the family in memory of James Skarda, please visit our flower store.