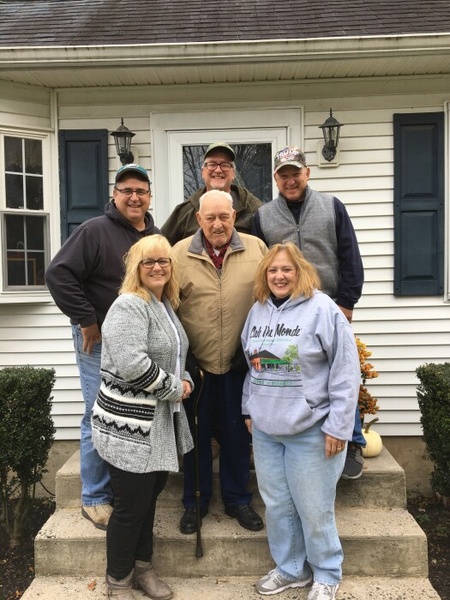 James R. Pletcher (J.R., Jim) of Mount Airy, MD passed away June 30, 2022. He was 92 years young! He is survived by his children, Dianne, with whom he lived, Gary (Deb) of Royersford PA, Tom (Pam) of Royersford PA, Tim (Fay) of Limerick PA and Joanne (Jim) of Berlin Heights, OH. His sisters Anna Mae Fly and Betty June Thorne of Ohio and 1 brother, Freddy (Janice) of Phoenixville PA. He is also survived by 10 grandchildren, Jennifer(his #1)(Mario) with whom he lived, Tom Jr (Jenny), Daniel (Raina), Joshua (Bryanna), Megan (his #1) (Alex), Michael (Kelly), Cory, Alyson (his #1) (Bryce), Allison (his #1)(Eric), Alex and honorary grandchildren Joshua & Jena, with whom he lived, Patrick and Michael Hohlfeld whom he just loved, and Cody Burger and Jessica (Jacob) Spears he adopted in the bonus round. He had 8 great grandchildren, Jayden, Molly, Sophia, Carson, Lark, Harper, Dawson, and little Knox. He is preceded in death by his parents, John and Johanna, wife, Betty, son, Jimmy, son-in-law, Steve, his brother, Leroy, and sister Linda. He will be sorely missed in all of our lives.
He was born May 18, 1930 in the mountains of Pennsylvania in Somerset County. He was the son of John Wesley and Johanna Catherine (Gary) Pletcher. He met his wife, joined the Air Force where he became a Staff Sergeant and then started a family. After the military, he landed in a little town outside of Philadelphia and became an active member of the community. He was a little league coach, church school superintendent, boy scout leader, band chaperone and drove the school bus part-time to support the growing family. He was a foreman at BF Goodrich, drove a tour guide bus in Valley Forge park, and after retiring he worked at Pathway School in the maintenance department.  He retired again after his wife passed away in 1992. He loved to travel, looking up relatives and becoming a part of their lives again. He moved to Maryland in 1996 and became an active member of the community here for another 25 years. He participated in an over 70 year old softball league. He became everyone’s Grandpa, continued traveling and worked at his beloved Butler’s Orchard for 20 years, where he loved driving tractor during berry picking, Easter bunny trail rides and of course  their October Festival.
He loved watching football, baseball, and his latest hobby, tallying the daily COVID figures. He was always learning new things and always loved sharing his opinions (even if we wanted to hear them or not). He was active at the local CW4 Bill Ruth Post 10076 helping out with bingo and enjoying the Friday night dinners.  Gardening was his passion and from May until October you could find him in his garden for hours.  He was always so proud of his home grown fruits and vegetables.  He belonged to the Spring Ford Masonic Lodge 553, was an avid bowler, and in his youth rode in and staged Dodge City Wild West shows as well as taught himself to play the guitar.
Our father was a simple man, believed strongly in God, and family always came first. He never met a stranger, and would light up any room he came into. If there was a baby in the room, chances are the baby was also in Pap’s arms.  His smile and laugh were contagious. His mantra was to keep putting one foot in front of the other, even when he wasn’t feeling well. There were always, always room for one more. He will live in our hearts and always be remembered to all as a friend, Dad, Grandpa, and Pap.
We love you, Dad. God Speed!

A celebration of James 's life will take follow at 7:00 pm on at the funeral home.  Rev. Tim May will officiate.

Interment will be at Green Tree Church of the Brethren in Phoenixville, PA on Thursday, July 7, 2022 at 2:00pm, Rev. Dr. Eric Woodworth and Mr. Scott Johnson will officiate.

To order memorial trees or send flowers to the family in memory of James (J.R.) (Jim) Pletcher, please visit our flower store.