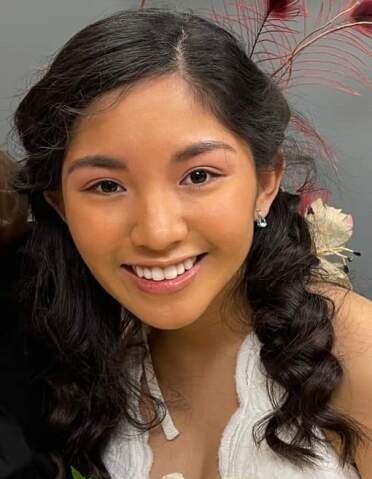 
It is with great heartache we announce the passing of Jan Camille Lohmann on Thursday September 16, 2021, at the age of 20. She is survived by her husband Jason Nathaniel Lohmann Jr. and daughter Reyna Sobianna Lohmann.

Jan Camille Lohmann was born on October 16, 2000, in the Philippines, her native country. She spent her childhood and teenage years growing up in a very large faith driven family. Love, forgiveness, and positivity were key parts of her life. Jan was very devoted to the Blessed Mother and was committed to her Catholic faith. At the age of 17 she moved to the United States to begin her journey in the U.S. Navy where she took much pride in serving her country. Two years later she met her soulmate Jason where they began a beautiful love story together. They married on March 10, 2021, surrounded by support, excitement, and love by Jason’s parents, sisters, and brother. Jan had a satirical sense of humor, a lighthearted attitude, and calmness about her. In February of 2021 Jason and Jan learned they were soon going to become parents. The glow and happiness found in Jan’s eyes was indescribable. She embraced becoming a mother and chose to devote her life to her daughter. By the grace of God, she was given six short, beautiful days with her daughter Reyna., Jan was blessed to be given a chance to look into her daughters’ eyes and tell her she loved her before passed away. She touched so many lives and in her 20 years of life everyone who crossed paths became better people because of her.

Two weeks ago, Jan passed away surrounded by unconditional love from her husband Jason as he held her hand when God brought her home. She will forever be remembered for her benevolence, sweetness, and bubbly personality. Her husband Jason will unfailingly remember his one true love and yearn for their souls to be reunited one day again. Her spirit will live on through her precious infant daughter. Though Reyna may never know her mother physically, their intangible hearts will always be bound together. She will also be missed by her mother and father-in-law Jason Lohmann Sr and Heather Lohmann for they cherished her as a daughter and will always be grateful for the love and happiness she brought to their son. Jan had a beautiful connection with her sister in laws Julia Alyse and Haley Alexis Lohmann that existed because they were more than sisters, they were the closest of friends’. She will forever leave a loving mark on her brother-in-law Hayden James Lohmann for they were more than buddies but also partners in crime. Jan was loved by the Dunn and Lohmann family from the moment she became a part of their lives. She touched their hearts with her free spirt and contagious laughter. She will also be lovingly remembered by her Aunties Janis and Jasmine Tiu for their immeasurable loving connection. Jan’s loyal and loving bond with her father Leo Solon and mother Jo Celeen Tiu Solon will always be remembered by them. The charisma and kindness that Jan exhibited everyday will be remembered by her brothers Jan Rae Solon and Kevin Solon and sisters Aliyah Solon and Fianna Tiu. She will also be remembered for her love and compassion by her Grandparents, Uncles, Aunties (Mamas), Cousins and friends whether they live close by or in the Philippines. Jan’s bright light touched everyone in her life. Jan will always be in her family and friends’ hearts and forever will be missed.

The family will have a private visitation from 2-4pm and appreciates your respect for their privacy during this time.

Friends will be received from 6-8pm on Sunday, September 26, 2021, at Stauffer Funeral Homes, P.A., 1621 Opossumtown Pike, Frederick, MD 21702. A Mass of Christian Burial will be held at 12 noon on Monday, September 27, 2021, at St. Katherine Drexel Catholic Church, 8428 Opossumtown Pike, Frederick, MD. Father Keith Bosivert will be the celebrant. She will be laid to rest in St. John’s Catholic Cemetery on Third and Fourth Street in Frederick.

To order memorial trees or send flowers to the family in memory of Jan Lohmann, please visit our flower store.