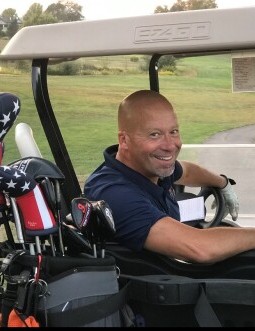 
John grew up and resided in Rockville Maryland and attended Montgomery College where studied Criminal Justice. He relocated to Frederick Maryland and became the owner and operator of Quality Transmissions.


In 2009, he embarked on a successful career in real estate. He quickly became a top producing sales associate and in 2019 he received his broker license. In 2020, John and Kim formed the Kimberly John Group of RE/MAX Results building a team of young, vibrant, and talented agents that quickly rose to success through John’s mentoring and  teaching.
John’s passion for teaching was also shown through his years of coaching boys’ football and basketball for Middle School in Middletown Maryland.


John was an avid golfer and he enjoyed playing with family and friends. He spent a week each year with his “band of brothers” golfing and reminiscing, laughing, and enjoying life. John loved riding his Harley Davidson motorcycle with the wind at his back and the sun in his face. John could fix anything and had the tools to do everything from turning a screw to renovating an entire home to perfection.  There were never problems but only solutions for John.


John’s beautiful smile, quick wit and gentle soul will be missed by so many.


The family will receive friends from 10:00 am to 11:00 am on Saturday, April 30, 2022 at St. Katharine Drexel Catholic Church, 8428 Opossumtown Pike in Frederick, MD. A Memorial Mass will follow at 11:00 am.  Father Mike McDermott will officiate.
Interment will be private.

In lieu of flowers, a gift may be directed, in John's name, to the Frederick Health Development Fund at 400 West Seventh Street, Frederick, Maryland 21701.


Expressions of sympathy may be offered to the family at StaufferFuneralHome.com.

To order memorial trees or send flowers to the family in memory of John Potter, III, please visit our flower store.