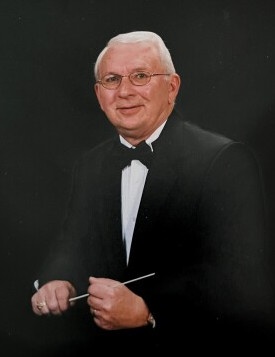 John Joseph Slezak, 82, of Frederick, Maryland, passed from this life on Sunday, July 10, 2022 at Frederick Memorial Hospital in Frederick, MD.

He was a retired music teacher with Frederick County Public Schools, having been band director at Frederick High School and West Frederick Middle School.  He was also the founder and music director of the award-winning Spires Brass Band.

John was a graduate of Indiana University of Pennsylvania, with a Bachelor of Science Degree in Music Education and a Master of Arts Degree in Trumpet Performance from Carnegie-Mellon University.  Prior to embarking on a teaching career, he was a member of the 2nd Army Band, at Ft. George G. Meade, MD and the 82nd Army Band in Stuttgart, Germany.  Additional studies in trumpet and conducting were taken at Catholic University of America under Lloyd Geisler, principle trumpeter and Associate Conductor of the National Symphony.  As a trumpeter, he performed in a variety of musical groups including the former Ted Clark Big Bank, the Hagerstown Municipal Band. and the Potomac Symphony in Hagerstown.  He was also an adjunct professor of trumpet at Shepherd University, WV.

During his teaching career, he earned an Innovative Teaching Award for the introduction of a high school electronic music curriculum, a Teacher of Excellence Award from the Frederick County Chamber of Commerce, and was recognized as a "Teacher Plus" by the Board of Education.  The Frederick High School band program excelled under his leadership for over 20 years, having participated in music festivals from Canada to Florida.

As founder of the Spires Brass Band in 1994, John directed the band to five North American Brass Band Championships, as well as regular 4-concert seasons at FCC, and numerous outdoor concerts, civic functions, and festivals.  He was recognized for his musical endeavors by the city of Frederick with a proclamation stating May 22, 2010 as "John Slezak Day", and was awarded a Key to the city of Frederick.  Also the Spires Brass Band was recognized in a proclamation for enriching the cultural life of Frederick County by the county executive Jan Gardner on May 18, 2019 entitled "Spires Brass Band Day" for its 25th Anniversary.

He held memberships in the American Legion Post 11, Frederick Elks, FCRSPA, MRSPA, St. Katherine Drexel Catholic Church, St. Vincent DePaul Society.  He also served on committees celebrating the 250th Anniversary of Frederick County, Frederick City, and Frederick's 4th of July.  He is survived by his wife, Gail Kennedy Slezak, with whom he traveled the world extensively.  They were married for 52years.

A Mass of Christian Burial will take place at St. Katharine Drexel Catholic Church, 8428 Opossumtown Pike in Frederick, MD. on Monday, July 18, 2022 at 11:30am. Interment will be at Resthaven Memorial Gardens in  Frederick, MD.

In lieu of flowers, Memorial Donations may be made in his name to the charity of your choice.

To order memorial trees or send flowers to the family in memory of John Slezak, please visit our flower store.