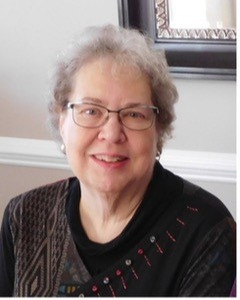 Judy was born in Greenville, Pa. on February 2, 1947, the oldest child of Stanton W. and Evelyn Westermann Simkins. Judy attended several elementary schools and high schools in Pennsylvania and Ohio, moving as her father advanced in his career as a school administrator. She graduated from Uniontown High School, PA, in 1965.

Judy attended The College of Wooster, where she studied Chemistry. She worked as a Technical Information Analyst in the Research Labs of Eastman Kodak Co. in Rochester, NY.  She had two daughters - Sara Elizabeth and Susan Michelle from her first marriage.  In May 1980, she married Thomas H. Haines.  They raised their family in Rochester.  Judy was a Girl Scout leader and an active member of Trinity Episcopal Church.  Following her retirement in 2003, Judy & Tom moved to Frederick, MD.  Judy was an active member of All Saints’ Episcopal Church, serving as Senior Warden, Vestry member, Altar Guild and other ministries. Judy loved to travel, visiting family, friends, and sites around the world.  She combined her love of travel and photography, making scrapbooks of her trips and family events. She enjoyed playing bridge, music, and spending time with dear friends.