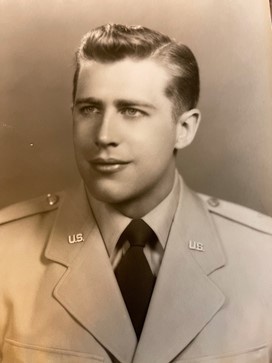 Kenneth H. Ludlum, 91, was born in Albany, New York, on November 16th, 1929, to John Henry and Mary Harpham Ludlum. Ken lived the early part of his life in Albany, graduating from the NY State College for Teachers (now UAlbany) with his bachelor’s in 1951 and his master’s in 1952. On December 19, 1953, Ken married his lifelong bride, Audrey Robinson McEwen, who predeceased him in 1995.

Three months after receiving his master’s, Ken entered the U.S. Air Force with a direct commission to become a meteorologist. After a year studying meteorology at Massachusetts Institute of Technology, and four months of basic training, Ken was made a 1st Lt and was stationed overseas at Toul-Rosières Air Base in France. He and Audrey spent three years in France, first living in Commercy, and then on base.

Upon returning from France, and while in the Air Force Reserve, Ken attended Rensselaer Polytechnic Institute in Troy, NY, receiving his PhD in Physical Chemistry in 1961. He was honorably discharged from the USAF in 1962.

Ken was a 50+ year resident of Beacon, NY, and worked at the nearby Texaco Research Center for almost 32 years. As a Senior Research Chemist, Ken worked extensively on environmental matters to reduce air pollution after passage of the Clean Air Act of 1970. Ken testified before Congress several times, as well as before a number of states and municipalities, and represented Texaco on several committees of the American Petroleum Institute. While at Texaco, Ken was co-author of several published papers, including: “Mass Spectrometric Evidence for Heptaborane,” in the Journal of the American Chemical Society; “Activation Energy for the Three Body Reaction of Helium Triplet Atom with Normal Helium,” in The Journal of Chemical Physics; “Decay of Metastable Helium Molecules and Atoms in an Afterglow,” in the Journal of the Optical Society of America, and his now-unclassified Doctoral thesis, “The Oxidation of Tetraborane,” reproduced by the Armed Services Technical Information Agency. He retired from Texaco in 1992.

Ken was an avid skier, just like Audrey, and took full advantage of the former Dutchess Ski Area in Beacon. He supported Boy Scout Troop #1 while his sons were members. He was an active member Trinity Episcopal Church in Fishkill, singing in the Trinity choir for many years, and also was a member of the Euterpe Glee Club. Indeed, Ken enjoyed singing until the very end of his life.

His connections to the Frederick, MD area include his Son Andrew, and grandchildren and great grandchildren.  His father-in-law, Alfred R. McEwen was also the former President of Ox-Fiber Brush Company until 1958.

There will be a graveside service on Wednesday October 27, 2021 at 10 am at Fishkill Rural Cemetery in Fishkill, NY.

To order memorial trees or send flowers to the family in memory of Kenneth Ludlum, please visit our flower store.