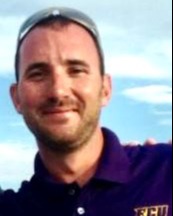 Kevin was born January 11, 1981, in Washington, DC to parents, Dan and Barbara Boyle of Middletown.

Kevin graduated from Middletown High School in 1999 where he played football as a black Knight, and in 2005 graduated from East Carolina University in Greenville, NC.

Most Recently, Kevin was employed by Weis Markets in Spring Ridge as the deli manager and previously was a managing partner for Jersey Mike’s in New Bern, NC.
Kevin was an enthusiastic sports fan being very passionate and loyal to the Chicago Bears. He enjoyed playing golf with his numerous friends, or least some semblance of swinging a club and chasing the ball. Above all, Kevin loved spending time with his beautiful beloved four year old daughter, Hannah.

In addition to his parents, Dan and Barbara, Kevin is survived by his brothers, Patrick Boyle of Columbia, SC and John Boyle and wife, Sara, and their two amazing boys, Everett (10) and Bradley (7) of Asheville, NC; Tina Allen of Walkersville, the mother of Hannah Joanne Boyle, their beautiful and cherished daughter; and left behind are also a very large, very loving extended family, including numerous aunts, uncles, and cousins and countless friends.

The family will be receive friends from 4 to 8 p.m. on Thursday, November 17, 2022 at Stauffer Funeral Home, 1621 Opossumtown Pike, Frederick.

In lieu of flowers, the family requests memorial donations be made, in Kevin’s memory, to St. Jude Children's Research Hospital. St. Jude has and continues to treat children from all 50 states and from around the world.