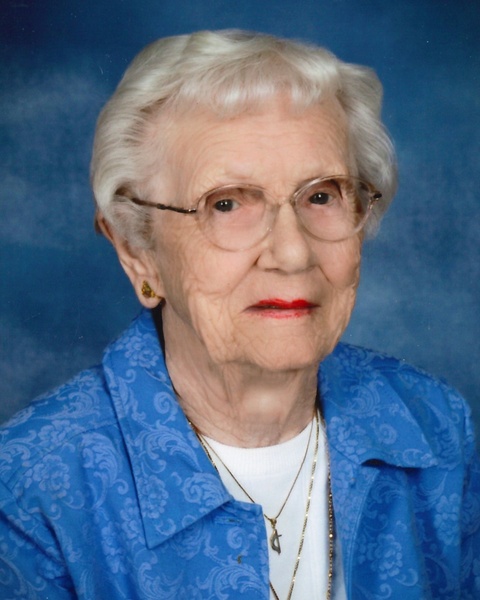 Mrs. Mildred Crum Nicodemus passed away on August 15, 2022. She was the wife of the late Roger Null Nicodemus who departed from this earth on November 13, 1991.

Mildred Harriet Crum was born October 4, 1923, on the family farm near Libertytown, Maryland to parents C. Raymond Crum and Helen Ada Thomas Crum. Her family relocated to the family farm on Opossumtown Pike in the late 1920s when she was a small child.

Mildred attended one-room Bloomfield School for five years, then Church Street School, and graduated from Frederick High School in 1940. She graduated from Towson State Teachers College in 1944 and began teaching in Buckeystown 2-room schoolhouse (1945-1948). During her years of teaching for the Frederick County Board of Education she also taught at Parkway School (1950-1951), Middletown School (1952) and taught 4th grade at North Frederick Elementary School until her retirement (1954-1984). After retirement, she volunteered in schools and Homewood at Crumland Farms.

Mildred was a member of Buckeystown United Methodist Church for many years, as well as the National Education Association, Maryland State Teachers Association, AARP, Gamma Chapter of Delta Kappa Gamma, American Legion Auxiliary, Frederick Memorial Hospital 1902 Club and Hospital Auxiliary, and was a very active resident of Homewood at Crumland Farms since 2011.

Mildred enjoyed yardwork, cooking, baking, hosting family gatherings, knitting, playing bridge, attending theater productions and concerts, and going to lunch with small groups of friends. She will fondly be remembered as the “social butterfly” at Homewood, with a generous, caring spirit and love for family, children and friends of many years.

In lieu of flowers, the family requests donations to the Community Foundation of Frederick County for C. Raymond & Helen Crum Memorial Fund for Chapel Lutheran Church, Buckeystown United Methodist Church Endowment Fund, or a charity of choice. Mildred and her family wish to express appreciation to staff, nurses and residents in Homewood at Crumland Farms for making her stay at Homewood very pleasant, caring and loving.

To order memorial trees or send flowers to the family in memory of Mildred Crum Nicodemus, please visit our flower store.