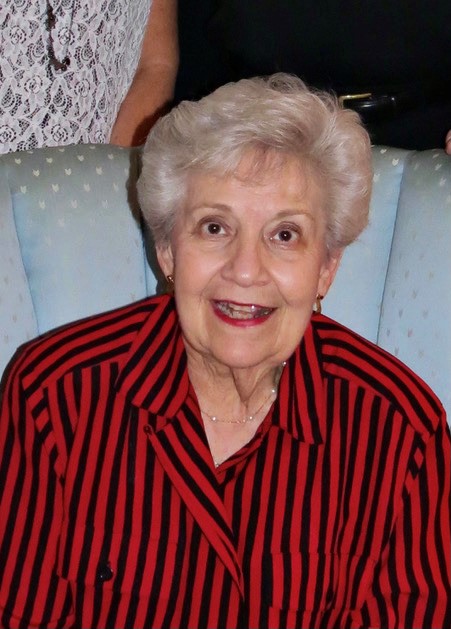 Nancy Hammond Murfin, 91 of Frederick, MD passed away on October 28, 2021.
Born Nancy Jane Hammond on January 6, 1930 in Keedysville, MD, she was the daughter of Roscoe and Shirla Hammond.  Mrs. Murfin was a graduate of Boonsboro High School and earned her Bachelor’s Degree in Home Economics from Catawba College in 1951, and later her Master’s Degree from Western Maryland College.  In April of 1951 she married her sweetheart, James V. Murfin, and resided in Hagerstown, MD. In August of 1965, they moved to the Woodley Gardens neighborhood in Rockville, MD, where Mrs. Murfin remained for 49 years before relocating to Frederick, MD.  She was a teacher of Home Economics in the Maryland Public School System for nearly 30 years.
Mrs. Murfin was a loving and devoted mother and grandmother who loved to read, sew, garden and spend time with her family.  The ultimate hostess, she loved to cook, entertain, and gather with neighbors and friends including monthly book, bridge, and investment clubs. She enjoyed sporting events and was a devoted fan of the Baltimore Orioles, Washington Redskins, and University of Maryland Sports teams. Mrs. Murfin traveled the United States with her family and for many years to the National Parks as part of the National Park Service Alumni Association after Mr. Murfin passed.  She enjoyed cruises and traveling to Europe.
Mrs. Murfin was an active member of the Rockville United Methodist Church until her move and a 71 year member and past Worthy Matron of Olive Branch No. 34 of the Order of the Eastern Star. She was a member of the National Park Service Alumni Association and the Montgomery County Retired Teachers Association. She established The Nancy Murfin Nursing Scholarship at Frederick Memorial Hospital in 2021 to honor caregivers.

Survivors include her son, Steven J. Murfin of Olney and Queenstown, MD and her daughter, Susan D. Cardaro (Tom) of Highland, MD; a brother, Gerald C. Hammond (LaRue) of Frederick, MD; a grandson, Thomas J. Cardaro; three granddaughters, Kristina N. Murfin, Emily A. Cardaro and Amy M. Cardaro, and many nieces and nephews.  She was predeceased by her husband, James V. Murfin in 1987 and her brother, Robert B. Hammond in 2016.
Family and friends may gather for visitation on Friday, November 5th from 11-1 at Stauffer Funeral Home, in Frederick, MD with a service beginning at 1pm.  Interment will follow at Fairview Cemetery for immediate and extended family who are able to attend.
In lieu of flowers, donations may be made to the Save Historic Antietam Foundation, Inc., P.O. Box 550, Sharpsburg, MD 21782.

To order memorial trees or send flowers to the family in memory of Nancy Murfin, please visit our flower store.