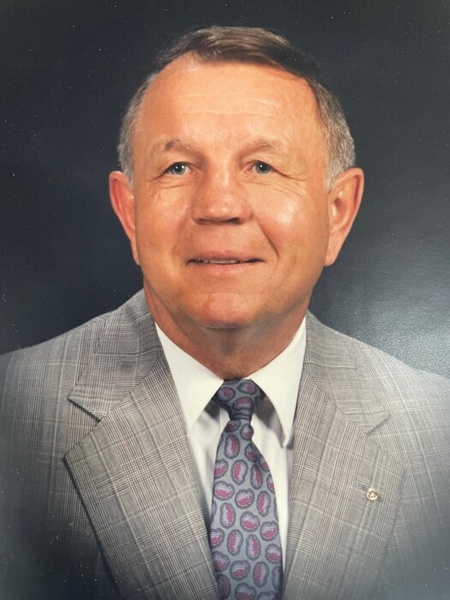 Robert Lewis Loving, 88, died peacefully in his sleep on Thursday, September 16, 2021 at Frederick Health Hospital. He was preceded in death by his beloved wife of 58 years, Betty Casey Loving, who died in 2015.

Lewis was born on August 24, 1933 in Bybee, Virginia to the late Elias and Rosamond Loving.  He graduated from Georgetown College (Georgetown, Kentucky) in 1955 with a degree in finance.  He had a minor in physical education. While at Georgetown, he joined Pi Kappa Alpha fraternity and participated in many sports related organizations. He had fond memories of playing football and baseball in both high school and college, as well as continuing his baseball career as a catcher in the minor leagues for a team in Montana. He played for two years before deciding to leave sports and enter the world of insurance.

He married Casey, his college sweetheart, shortly after her graduation. After moving to Charlottesville, Virginia, he began his career at State Farm Insurance. In 1965, the family moved to Frederick County, Maryland, after Lewis was transferred to State Farm’s Frederick office.  They lived in Yellow Springs and Braddock Heights before settling in Middletown in 1976.  Lewis eventually left State Farm and joined the Stoffer Sanner Insurance Agency where he was an agent and later a partner in the firm.  Lewis was a baseball coach and football official for Frederick County sports for many years. He coached a church softball league for several years in Washington County.

He was a deacon at First Baptist Church in Frederick.  He and Casey were active members of the Exchange Club, and he was a Rotarian. In later years, he joined Christ Reformed United Church of Christ in both Middletown and Boonsboro and was active in the church life there. He and Casey were well known as animal lovers and Boxer breeders.

Lewis is survived by his daughter, Kelly Crenshaw and husband, Andrew, of Shenandoah Junction, West Virginia; and son, Michael and wife, Michele, of Middletown; 21 grandchildren; and 14 great-grandchildren.

A memorial service is scheduled for Saturday, October 30th at 11 a.m. at the home of Kelly and Andrew Crenshaw, 273 Americana Lane, Shenandoah Junction, West Virginia, 25442, with a reception to follow. All are welcome to attend and celebrate Lew’s life.

In lieu of flowers, please consider a donation to the Alzheimer’s Foundation or a charity of your choice.

The family would like to thank the staff at Frederick Health Hospital and Stauffer Funeral Home for their efforts and care. Expressions of sympathy may be offered to the family at StaufferFuneralHome.com.

To order memorial trees or send flowers to the family in memory of Robert Loving, please visit our flower store.