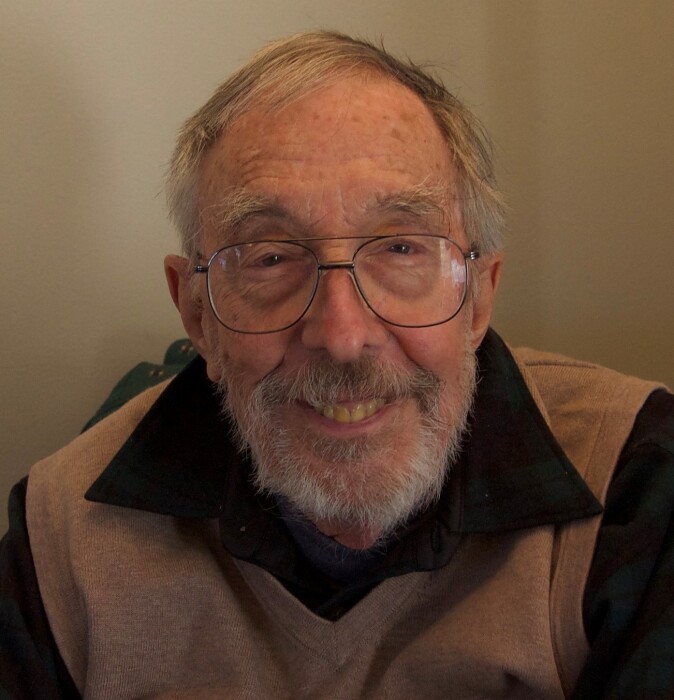 Roger Witt Johnson died peacefully on Saturday, November 6th.  He is now in the arms of his Lord and Savior Jesus Christ.  He was preceded in death by his wife Catherine “Kate” Johnson and his parents Fred and Freda Johnson.  He is survived by his son Andrew of Ashburn VA, his daughter-in-law Margaret and their children Alexander and Samantha, his son Paul of Newport KY, his daughter-in-law Jeanne and his children Roger and Miriam.  He loved his family deeply and was deeply loved by them.

Roger was born on May 4th, 1929, in Kalamazoo MI.  He graduated from Kalamazoo Central High School in in 1947.  He graduated from Valparaiso University in Valparaiso Indiana in 1952 with a Bachelors of Science degree in Biology.   He served in the United State Army from November 1952 until he was honorably discharged in November 1954.  While in the army he served as a rifleman, medic, and lab technician.   Following his military service, he earned a Masters Degree in Microbiology from the University of Kentucky in 1958.

Following graduation, he and Kate moved to Frederick Maryland where they both worked at Fort Detrick.  In 1972 he began working at the Frederick Cancer Research Center.  Following the Cancer Center, he worked as a Scientific Director for 15 years at Bio Whittaker (now Lonza).  At 65 he left full time work and became the Secretary of the Association of Medical Diagnostics Manufacturers, which allowed he and Kate the opportunity to travel.  Forever interested in learning and expanding his horizons, Roger audited classes at Frederick Community College well into his 70s.

Roger loved the Chicago Cubs, playing cards, coaching Clover Hill baseball, fishing, and playing with his grandchildren, most especially at the Outer Banks during annual family vacations there.  Roger had a love of history, particularly the American Civil War and was an active member of the Hagerstown Civil War Round Table for several decades.

Baptized in 1929 and confirmed in 1943, he was a life long Lutheran and a charter member of Peace in Christ Lutheran Church in Walkersville, where he served as an Elder for many years.  It was through Peace in Christ church that he learned about Glade Valley Community Services, and he volunteered with them for many years helping them serve those in need.

The family wishes to acknowledge the loving care he received at Sommerford Place Assisted Living, Glade Valley Nursing Home, Frederick Memorial Hospital, and Kline Hospice House during the final years and days of his life.  Additionally, the family wishes to acknowledge Visiting Angels Barb and Belinda, who spent numerous hours taking care of Roger in those final years.

Interment will follow in St. John's Cemetery in Frederick.

In lieu of flowers, donations to Peace in Christ Lutheran Church or Glade Valley Community Services are requested.

To order memorial trees or send flowers to the family in memory of Roger Johnson, please visit our flower store.