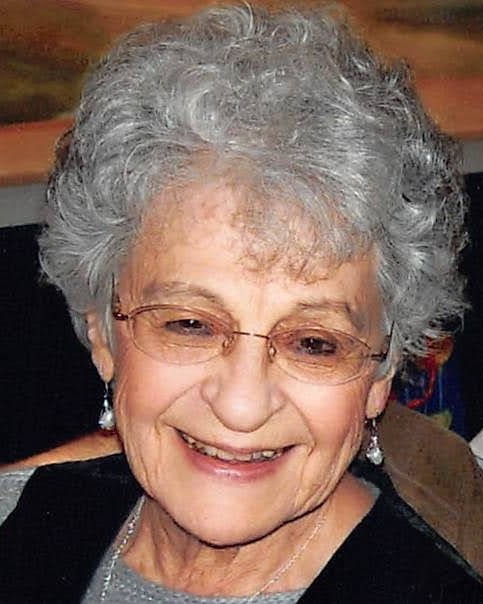 Rosetta Ruprecht, a loving mother and friend of many, passed away on December 13, 2022, at the age of 97 at Somerford Assisted Living in Frederick, MD.  She was looking forward to her 98th birthday on January 14.
Rosetta’s parents immigrated from Sicily to the United States around 1920 and settled in Washington, DC.  She was the second child in a family of six children, five girls and one boy, and she attended Academy of the Holy Names High School.  She married Joseph D. Ruprecht in 1945 and was his loving wife for 49 years, until his death in 1994.  She held various jobs over the years at the IRS, Vitro Labs, Weight Watchers and retail positions.
Rosetta loved her family and loved meeting new people and listening to their stories.  As a teenager, she participated in different types of dance.  After her children were grown, she continued to dance with several studios, performing on stage in various venues.  She danced into her early 80s.  Rosetta also performed in many plays sponsored by Leisure World in Silver Spring where she resided.
In 2009, Rosetta moved to Crestwood in Frederick, MD, where she was active in many women’s groups.  In 2017, at the age of 92, she moved into Somerford Assisted Living in Frederick, MD.  She made many friends while at Somerford and won the hearts of many Somerford employees.  She was always fun to be around.
Rosetta is a loving mother, grandmother, great-grandmother and sister.  She is loved and remembered by her sons:  Thomas Ruprecht of Harpers Ferry, WV, Edward Ruprecht of Gaithersburg, MD, James Ruprecht of Urbana, MD; her daughter, Lucy Blanchard of Frederick, MD; and her sister Marie Beckworth of Ellabell, GA.
She is preceded in death by her husband, Joseph D. Ruprecht; her sons, Joseph A. Ruprecht, and Eugene Ruprecht; her sisters, Pauline Messineo, Josephine Hamlette, and Antoinette Miller; and her brother, Salvador Anselmo.  Rosetta is also loved and remembered by sixteen grandchildren and 29 great-grandchildren.
The family sincerely thanks the staff at Somerford Assisted Living for the care and love they showed Rosetta over the past five years.
A service will be held at 10:30 am on Wednesday, December 28, 2022 at St. Joseph-on-Carrollton Manor Catholic Church at 5843 Manor Woods Drive in Frederick, MD.
In lieu of flowers, donations may be sent to the Special Olympics.

To order memorial trees or send flowers to the family in memory of Rosetta Ruprecht, please visit our flower store.