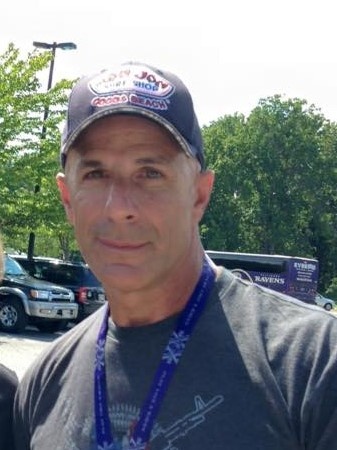 Thomas “Tom/Tommy" Eugene Pauter, 63, of Frederick, MD passed away on Sunday, April 3, 2022 surrounded by family following a short and courageous battle with cancer.
Tom was born August 27, 1958 in Washington, DC to Helen Stathopoulos Allgood of Ocala, FL and Robert Pauter. He grew up in Wheaton, MD and eventually settled in Frederick, MD. He spent most of his adult life as a professional driver in various industries, including companies such as BFI/WM, Coca Cola, NFI, United Rentals, and LaFarge. He spent his last six years at Black Horse/Penske delivering for Aldi. Tom was a very hard worker, always putting forth his best effort, willing to go above and beyond, and regularly working extended hours and on his days off. Tom also served his country, completing over 20 years in the Army National Guard including multiple active duty assignments for natural disasters, a presidential inauguration, post-911 homeland security, and a tour in Iraq (OEF).
Tom was passionate about motorcycles and automobiles. He was mechanically inclined; he built and modified several of his HD motorcycles and was most proud of his ’69 Panhead. He and his wife enjoyed many rides on his ’01 HD DWG. Tom tinkered with anything on wheels, from motorized trikes to his Wrangler, Bronco and F150. He especially loved his Dodge Challenger ScatPack. He was an outdoors person and took immense pride in maintaining his family home. He was a “Tom” of many trades!
Tom loved to drive and explore wherever he went. He particularly loved the beach and often took day trips to OCMD with his son. He and his wife enjoyed traveling, their most memorable trips included a Mediterranean cruise, and family trips to Greece, Alaska and Hawaii. He was a kid at heart and enjoyed the simple things in life. Tom was a practical joker and always looked for the comedy in things. More than anything else, Tom loved his family dearly and they loved him. He was a wonderful husband, father, son, brother, uncle, son-in-law, brother-in-law, granddad, and friend. He was taken from us too soon and will be missed immensely by his family, friends and military comrades.
Tom leaves behind his partner and wife of 32 years, Tracy Vail Pauter; his daughter Francine Pauter (Chris Beach) and grandson Theodore; his son Andrew Pauter; his mother; his sister Mary Gage and her son’s Johnny, Anthony (Folake), and Matt (and son Lincoln); his brother Michael Pauter; and his in-laws Vernon Vail, Suzan Vail and Vallery Vail. Tom is predeceased by his father Frank Allgood, his uncle Gus Stathopoulos, his sister-in-law Sandra Vail, and his nephew Daniel Vail.
The family extends heartfelt thanks to our friends, Frederick Hospice, Kline House, and Thrive for their care and support over the past few months. A celebration of life will be held at Stauffer Funeral Home, 1621 Opossumtown Pike, Frederick, MD on Monday, April 11 at 4:00 PM. A private interment will be held at Boyds Presbyterian Church where he will be laid to rest.
Expressions of sympathy may be shared with the family at staufferfuneralhome.com.
To order memorial trees or send flowers to the family in memory of Thomas Pauter, please visit our flower store.