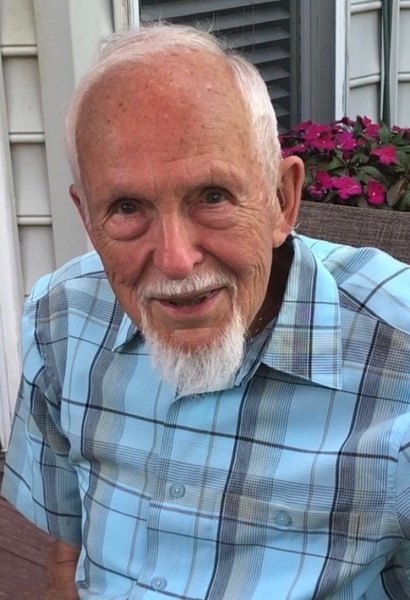 Wayne Clair Worrell, age 89, of Frederick, MD, departed peacefully at his home on January 26, 2022, surrounded by his loving family.
Wayne was born on May 12, 1932 in Altoona, PA to his late parents, Wayne C. Worrell and Ann E. Moore. He was preceded in death by his beloved wife of 65 years, Ida Marie (Patti) Worrell.
After growing up in Altoona, PA and graduating from Altoona High School, Wayne spent two years in military service with the US Army from 1952 to 1954, as a cartographer during the Korean War, and spent 12 years in the Army Reserve.  He had a successful career at the Defense Mapping Agency in Washington, D.C. for 35 years, including working with computer security. Additionally, he was a partner at Bowman & Associates, a tax preparation business, for 15 years.
Along with his work life, Wayne was deeply dedicated to his family and his faith.
He was a lifelong fan of the Washington Football Team, an avid reader, and enjoyed his time tending his gardens and yard.  Wayne had a special place in his heart for animals, and shared his life with many beloved pets over the years.  His family has countless fond memories of camping and vacationing at the beach in Ocean City, MD.  In his later life, Wayne’s many grandchildren and great-grandchildren brought him much joy.  He was a devout member of several churches during his lifetime, where he served on many boards and committees, along with teaching Sunday School.
He is survived by his sister, Marilyn Sakowski and husband Joe, of Leland, NC; six children, Wayne Worrell and wife, Carolyn of Fredericksburg, VA; Cynthia Schumann and husband Lewis, of Naples, FL; Joseph Worrell of Sabillasville, MD; Timothy Worrell and wife, Zoë of Ocean Isle Beach, NC; Melanie Hoyt and husband, Paul of Frederick, MD; and Terri Dawson of Frederick, MD, 16 grandchildren and 30 great-grandchildren, with another one on the way.
The family is planning on a private celebration of his life at a later date.
In lieu of flowers, memorial donations may be made to: Hospice of Frederick County, 1 Frederick Health Way, Frederick, MD  21701. Expressions of sympathy may be offered to the family at StaufferFuneralHome.com.

To order memorial trees or send flowers to the family in memory of Wayne Worrell, please visit our flower store.