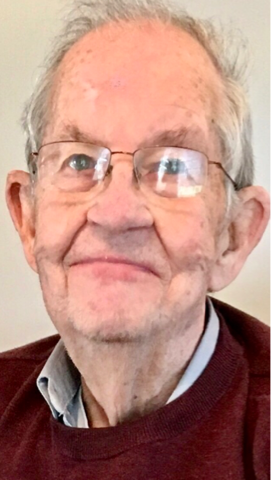 He spent hours trying to solve the puzzles of poker and thoroughbred horse races.

He loved literature - he had Wolfe and Cheever and Frost and Carver on his bookshelf - but he would gut-laugh at a bawdy joke.

He was a caring husband of 55 years to Maria, who called him “love” (or “William” when she was serious).

He was a great dad to their two children, and a loving Grampy to the grandkids.

Bill was the only child of William Blanchard and Mabelle (Caldwell) Blanchard. He grew up outside Boston, Mass. where he fell in love with the Celtics and Red Sox. He was 78 when the Sox finally won the World Series in 2004.

He graduated from Tufts University after going through an accelerated program near the end of World War II, and served in the U.S. Navy as a quartermaster.

He spent most of his working career as an administrator with the Marriott Corporation, becoming an assistant treasurer who invested money for the company’s pension plan.

The family lived for years in Rockville, Md., before Bill and Maria moved to Frederick in the early 1990s.

Their home became a gathering place for family.

And if anyone ever brought up a trivia question or a brain-teaser, Bill would usually be the first to get it - followed by a triumphant, “Boy, I’m good!” (The staff at Somerford House & Place, where Bill lived the last few years, would recognize that.)

We’ll remember his bravado with a smile.

The family will hold a private service at Resthaven Memorial Gardens. In lieu of flowers, please make a contribution to the charity of your choice.

To order memorial trees or send flowers to the family in memory of William Blanchard, Jr., please visit our flower store.