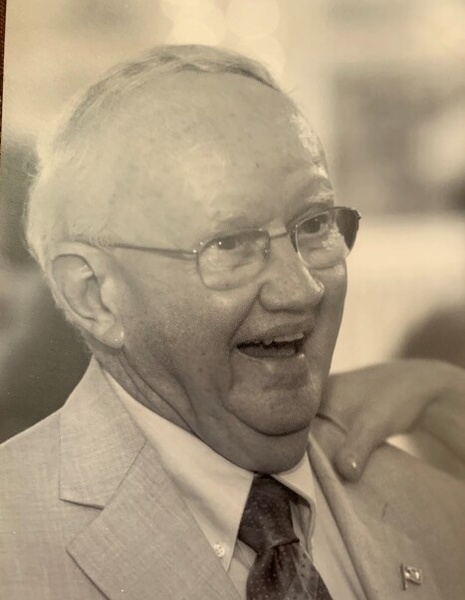 William (Bill) Guilday of Mount Airy died on Thursday, September 30, 2021.
Born on October 7, 1931 in Chester, Pennsylvania, he was the son of the late Michael Delaney Guilday and Esther Catherine Lawler Guilday.
He was the husband of the late Mary Eileen Guilday of 52 years.
Mr. Guilday represented the Veterans of Foreign Wars U.S. Navy from 1950-1954.  He served two tours of duty with the European Occupation Forces after World War II and one tour of duty in Korean waters during the Korean War.  He operated as the plane captain in Europe on the U.S.S. Carol Sea- air craft carrier.  While in Europe he was attached to the 6th Fleet, while in Korea he was attached to the 7th Fleet, Fast Task Force 77, and served with Naval Fighter Squadron 44 during all four years in the Navy.
He was a member of BPO Elks and served as exalted ruler of the Rockville lodge.  He was also a third and fourth degree Knights of Columbus member.  He was also a charter member of the Korean War Veterans, a member of the Mt. Airy American Legion Post 191 and a life member of the VFW Post 10076.
Mr. Guilday was the owner of North Strong Chemical Corporation for 12 years and was  a representative of Quark Scientific Glass Company for over 20 years.
Surviving family are his nine children and spouses:  Kevin R. Guilday of Walkersville, Md., Sean M. and Jeanne Guilday of Macon, Ga., Timothy L. Guilday of Frederick, Md., Brenda D. and Tony Trout of Gettysbury, Pa., Maureen D. and Curtis Peterman of Mt. Airy, Md.,Michael L. and Colleen Guilday of Fort Myers, Fl., Patrick L. and Tara Guilday of Thurmont, Md., Shane L. and Rebecca Guilday of Littlestown, PA., and Brigid D. and Bruce Holmes of Fort Bragg, NC.; 18 grandchildren: Kristin Boone, Adam Trout, Zachary Guilday, Kyle Guilday, Malachi Trout, Eileen Peterman, Kayla Hubbard, Ashley Reece, Hampton Peterman, Lucas Guilday, Michael Patrick Guilday, Philip Guilday, Patrick Guilday, II, Bruce R. Holmes, Brandon Holmes, Matthew Guilday, Paula Guilday, Mary Guilday and many great grandchildren.  He will be remembered by Brenda Guilday and Denise Lockner.
He is predeceased by his daughter-in-law, Vanessa Guilday.
Relatives and  friends are invited to call at the Stauffer Funeral Home, 8 East Ridgeville Blvd. Mount Airy, Maryland 21771 on Monday, October 4, 2021 from 7:00 pm to 9:00 pm.
Military Honors to be rendered at Arlington National Cemetery at a later date.
Expressions of sympathy may be offered to the family at StaufferFuneralHome.com.

To order memorial trees or send flowers to the family in memory of William (Bill) Guilday, please visit our flower store.