Attending funeral services can raise a host of questions, from what do I do to how should I dress. Here are a few of the most common etiquette questions that we get asked.

Many different types of services and ceremonies surround the death of a loved one. At first, they may appear very different from one another, but all of them have three things in common. Each one is: 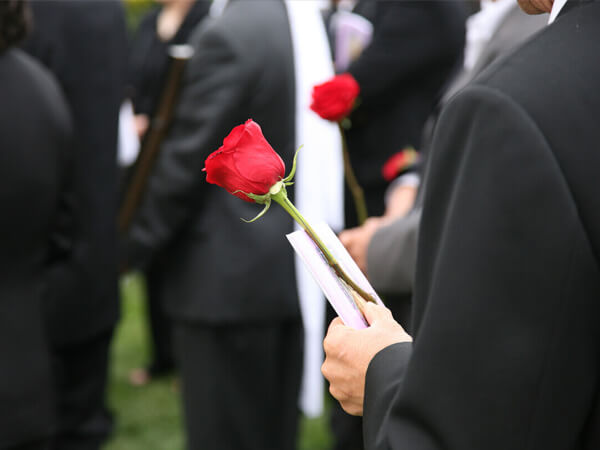 The type of service the deceased person’s loved ones select is a very personal choice, and may include one or more of the following:

Visitation: Sometimes called a “wake” or a “viewing”, the visitation is held at the funeral home, usually a day or two before any type of service. This is the time when people come to pay their respects to the deceased, and support and comfort the family and other loved ones.

Funeral: A traditional funeral is held within several days of a person’s death, usually in a place of worship or the funeral home. A funeral service generally begins with the body being brought in by pallbearers. The service is led by a pastor, funeral director or other officiant, during which people may say prayers, deliver eulogies, read passages from scripture or literature, and sing songs. At the end of the service, the body is removed by the pallbearers to the hearse.

Burial: If the deceased is to be buried, the site of the interment will be announced. Unless the gravesite is on the place of worship’s grounds, a processional of cars will form to drive to the cemetery. Everyone attending is welcome to follow the family to the gravesite service unless it is announced that the burial will be private, but no one is obliged to attend.

Cremation: If the body is to be cremated after the service, it will be taken back to the crematorium.

Memorial Service: Increasingly called Celebrations of Life, these types of services focus on celebrating the deceased person’s unique personality and achievements—in other words, telling their story. And unlike a traditional funeral that takes place immediately, a memorial service can be held weeks or even months after a person’s death—allowing more time for the family to plan a creative tribute. As you might imagine, the form these types of services take varies widely.

Reception: After the funeral or memorial service, families often choose to host a gathering at their home, the home of a friend, a restaurant or reception hall, or some other venue to share memories of the person who has died, and to continuing supporting one another. If, when and where this type of gathering will be is often announced at the end of the service by the officiant or a family member. Attendance is optional.

What do I do when an obituary includes the line “in lieu of flowers”?

Occasionally, an obituary will say “the family requests the omission of flowers.” When this happens, the family has personal reasons for this request, and it should always be respected.

More frequently, you will see the notation “in lieu of flowers, the family suggests donations be made to…” If you wish to make a donation to the family’s charity of choice in memory of their loved one:

Most charitable organizations have a system in place to acknowledge a memorial or honorary gift with a personal note or letter that does not reference the amount of the contribution. But it is perfectly acceptable to mention “We’ve remembered Quinn with a contribution to Frederick Memorial Hospital’s James M. Stockman Cancer Institute” in your sympathy note to the family.

What do I wear to a visitation, funeral or memorial service?

While black and dark gray are the traditional colors of mourning, guidelines regarding what to wear to a funeral or memorial service are far less rigid than they used to be. It’s not unheard of these days for the family to request that attendees wear the favor color of the person who has died, or clothing that reflects that person’s passion or hobby, especially in the case of Memorial Services and Celebrations of Life.

In the absence of a specific suggestion from the family, your choice of clothing should be conservative in both color and style. Think about what you might wear to a business meeting, a job interview, or religious service.

Men should avoid wearing jeans, short-sleeved shirts, athletic shoes, and baseball caps. Appropriate choices include a suit with a tie, or pants with a collared shirt, tie, belt and dress shoes.

Women should avoid wearing overly casual, festive, or revealing clothing. Appropriate outfits include a skirt suit or pantsuit, or a skirt of a conservative length or dress pants worn with a top with sleeves, a blouse, or a sweater, and flats or pumps. Hats are optional but appropriate.

Where should I sit?

When attending a service, be on time and enter the house of worship or location where the funeral will be held as quietly as possible. If there are no ushers, remember that the seats closest to the front should be taken by very close friends, with acquaintances seating themselves in the middle or towards the rear.

If you arrive late, enter a row from a side aisle, not the center aisle. If a processional has begun, wait outside instead of trying to squeeze past those who are a part of the cortege and are waiting to walk down the aisle.

If you know you must leave early, try to sit in the back so that you can leave as unobtrusively and unnoticed as possible. Make sure you sign the guestbook before the service begins.

Is it ok to bring children to a visitation, funeral or memorial service?

This is a personal decision, but the general thinking is that children should be encouraged to attend the services surrounding the death of a family member or close friend to whatever degree they feel comfortable. Children learn through these experiences that death is a natural part of life, and that we honor a loved one’s passing with rites and rituals that we observe together.

However, because young children can become restless or have trouble staying quiet, it is also appropriate to have them stay at home with a sitter. You could also bring someone with you to the visitation, funeral or memorial service who can take them home if needed.

Older children should sit with their family, closest to whomever can give them the most comfort. The children should wear clothing that is age-appropriate and similar in style to that worn by adult family members.

One reason I don’t like to go to visitations or funerals is I never know what to say.

The most important thing you can do for a family who is grieving is to just be there. Just your physical presence lets the deceased person’s family and loved one know that you are there to support them. Gestures as small as a kind word or a hug can be very comforting.

You can share a special memory or say how much you will miss the person who died, but it is most important to keep the focus on others. Speak from the heart, offer your condolences, and let those who are grieving know that you are available to support them in any way they need. There is no need to try to be profound or creative. When people are grieving, it is most helpful for them to hear things like:

Remember to keep the focus on the person who is grieving. This is not the time to talk about your own experiences of loss, and what they were like for you. The person who has recently lost a loved one is often in emotional shock. Don’t try to make sense of what’s happened, or put a happy face on it. The family is grieving, and are entitled to their own experience of that. While there’s no “right thing” to say to someone who has experienced a loss, avoid saying things like:

After experiencing a loss, many people feel very isolated. A compassionate word, a caring touch and your physical presence will be a comforting reminder to those who are grieving that they are not alone.

When you attend a funeral or memorial service, you should sign the guestbook. Looking at the guestbook after the event allows the family to know who was there, and provides another source of comfort and solace.

If the group that has gathered is very large, there may be multiple guestbooks, but you should sign only one. Simply write your name, and if there is a place for your address, provide that as well. If you don’t know the family very well, you can include your relationship to the person who died, such as “Jill Johnson, FCC colleague.”

Cell phones and smartphones should be left in the car or off before, during and after the service (not set to vibrate which is still audible). Out of respect, you should be completely present 100% of the time. Even glancing at a phone while waiting for the ceremony to begin is disrespectful. Photos should not be taken during the ceremony, but may be taken of groups of people who don’t usually get to see one another if done discreetly afterwards.